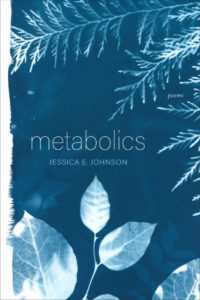 Much to the credit of Jessica E. Johnson’s full-length poetry book, Metabolics, published by Acre Books, I couldn’t read it at all until I managed to still my frenetic end-of-year energy. Caught in the throes of the family/work juggle and holiday preparations, I couldn’t quite catch onto the words. It wasn’t until after the new year, when I caught a cold, that I finally felt quiet enough to sit down and give over my real attention to this slender, beautiful, thought-provoking volume. At that point, I read it all in one go with great enjoyment and felt like I was tubing down a calm river on a clear day with a view of cedars and the feel of crisp, bracing air on my face.

“Herein”, the title of both the framing first and last poems of the work, offers a window into the speaker’s life and her take on the scientific title, interspersing excerpts from biology textbooks with scenes from her life and contemplations about her writing:

A long time later I came to live in a house on the edge of a forest, sleeping under
cedars every night, my offspring in the next room growing furiously with sleep.
Cedar is Thuja plicata, Western red. All cedars have scaly, fern-like needles that tend
to overlap. They do not point or pierce. Cedar fills my window, a great green lacing
down—countless fingers, new tips of bright growth. (1)

This layered approach, amalgamating the scientific, the domestic, and literary continues throughout, including through the next series of fourteen linked poems entitled “Of Daylight Saving Time, MyFitnessPal, and Indoor/Outdoor Cats” – the title itself indicating how Johnson sees the stuff of life as both weighty and light.

Despite so many attempts to resolve this tension,
sometimes you are you and also sometimes mother just as
light can be both particle and wave a person sometimes
other times a role and no one can locate you at any
particular time on that continuum of you and mother at
best the observers (you the self-observer) could assign
a probability. (14)

Johnson’t title comes fully into focus in the next section, “Of Metabolism,” which elaborates on the speaker’s visions of the various consumptions and conversions that happen around and within her: On dieting apps, she wryly notes, “You go to elaborate lengths to help the body exchange mass for air, consume more of itself” (23) Delving into the intersection of humans and our greater natural world she posits, “The rain eats ambition and produces a green glaze on steps and railings and the hood of the car” (29) and, with breathtaking ease she brings it all beautifully together:

The treemass respires through microscopic leaf-
pores inhaling the car’s breath inhaling the house’s breath
building its own body of carbon gathering sunlight in the
canopy while we walk the cool-field below. (33)

The collection feels of-the-moment, with one poem using and bending into its own shape those awful belly-type ads we have all seen on social media, and likely compared our own bellies to – thank you, Jessica, for taking those on! – and with other poems mentioning baking shows many of us watched with or without our children in the early pandemic. Crucially, Johnson reminds us throughout her collection of how much the world, even when actively studied, remains fundamentally unknowable. Her illustrated “Figure” poems, echoing science illustrations, are full of blanks and purposefully vague scribbles.  Her poems are full of questions, mysteries, and warnings about the incompleteness of our accountings.

Metabolic, a gripping, felt collection littered with beautiful phrasings and insights, is grounded in those quiet, wordless moments of satiety that take us by surprise and keep us rooted to the world and to ourselves:

Say one night after they’re in bed the fridge humming
you open up the screen door and step out. You full of
night, night full of you. You listen to ferns whose roots
store water you listen to salal whose leaves lose little
water whose body paints the shape of flame whose
berries hang right here. The super/blood/wolf moon now
risen. Like the moon you have stopped counting what
you feed yourself, the slice of apple in your mouth and
gone before you realized you were holding the knife. (82)

Ana C. H. Silva lives in East Harlem, NYC and West Shokan, NY. She’s found homes for her poems in various literary magazines and has created interactive poetry installations. She won the inaugural Rachel Wetzsteon Memorial Poetry Prize at the 92nd St. Y Unterberg Poetry Center in NYC. Her poetry chapbooks are One Cupped Hand Above the Other, with Dancing Girl Press, and While Mercury Fish, with Finishing Line Press.