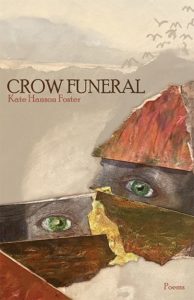 In her new collection of poems, Crow Funeral, Kate Hanson Foster writes about the beauty and stresses of motherhood. The book begins with the title poem “Crow Funeral,” which sets a melancholy tone for the collection and introduces a superstition of keeping children out of danger, which will carry on throughout the book. The death of a crow coincides with the downing of an airplane that remains unfound without any answers about its crash and disappearance. Questions about God’s existence and involvement arise, which the poet returns to again and again throughout the book as she wrestles with personal traumas.

Divided into four sections, the poems begin with a lyrical, musical hopefulness as the speaker desires to become a mother. Foster writes about wanting to swallow her past and her secrets in order to move on and be a “good” mother. After the first baby is born, the sweet moments of swaddling and comfort from nursing follow, along with an urgency to “get it right,” which new mothers will relate to.

Many of Foster’s poems rely on and play with an oral tradition magpie rhyme: “One for sorrow, Two for joy, Three for a girl, Four for a boy, Five for silver, Six for gold, Seven for a secret, Never to be told.” The playfulness of this rhyme, which is included as an epigraph to the collection of poems, is contrasted by Foster’s poems that expand upon the “sorrow” of redefining oneself and losing one’s previous self as well as the “secret” of postpartum depression. There is also anxiety in the poem “Three for a Girl” due to the baby girl who has “anomalies on [her]sonogram… fluid looming like thunderclouds between clouds… Pregnancy is wait. Test results / are wait. I wait through trimesters / like an anvil cloud eating the updraft.” Foster uses phrases from the magpie rhyme as poem titles interspersed throughout the book to elaborate on the realities of motherhood that are much more complicated than calming rhymes and lullabies.

Foster writes about feelings of suffocation that mothers feel when struggling to identify as separate beings from one’s children. She identifies this anchoring to one’s children in the poem “Vessel” where she writes,

Mothering, like surrender,
is something you do very well –
like the way oar tongue and water
understand each other. You’ve locked
your wrists to young bodies, the weight
of to-do lists…

In her poem, “Cockcrow,” Foster elaborates on this postpartum anxiety by writing, “… I had a mind. / I had ideas. And a beast seeps through unweaving / me thread by thread…” Despite her negative feelings surrounding herself as a mother, Foster also finds comfort in the primitive quality of breastfeeding one’s infant and being forced to pause the busy-ness of life to feed one’s child.

As the book progresses, the speaker increasingly questions God’s existence and involvement in her life as she descends into anxiety and depression and experiences personal atrocities, such as cysts in her baby’s brain and her sister’s fetus born dead. The first poem of the fourth section – “Glimpse” – begins with a bird crashing into the speaker’s bedroom window and lands “half-dead on [her]front porch / like an offering”, which circles back to the initial poem’s crow that signaled trouble and death. Although, in the end, even as “the crows announce themselves” in her poem “Reincarnate,” Foster concludes with a reincarnation, a personal baptism “in a clear rush of garden air” that concludes with a sense of renewal for the speaker. In the poem “Tapering off of Clonazepam,” the speaker realizes that she doesn’t want to be a “storm” for her family and recognizes the need for emotional support. Despite the difficulties of parenthood and redefining the self as a new mother, Foster’s lyrical poetics convey possibilities for gaining clarity and hope.

Jamie Wendt is the author of the poetry collection Fruit of the Earth (Main Street Rag, 2018), which won the 2019 National Federation of Press Women Book Award in Poetry. Her poems and essays have been published in various literary journals and anthologies, including Feminine Rising, Green Mountains Review, Lilith, Jet Fuel Review, the Forward, Third Wednesday, and others. She contributes book reviews to the Jewish Book Council as well as other publications, including Literary Mama and Mom Egg Review. She has been nominated for a Pushcart Prize and Best Spiritual Literature. She holds an MFA in Creative Writing from the University of Nebraska Omaha. She teaches English and lives in Chicago with her husband and two kids. https://jamie-wendt.com/