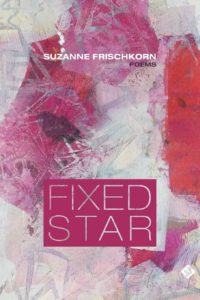 How do we understand the self? Such work is both an uncovering and an inventing, a mixture of history and imagination, an exploration of heritage and a discovery of how one chooses to approach the world. This theme, of the fraught nature of identity, is explored throughout Suzanne Frischkorn’s newest collection Fixed Star. The speaker in these poems asks,

What does it mean to disappear?
To lose the little sea inside you?

The poem “What It Means to Be a Cuban-Hyphenated” answers succinctly,

It means I’m on a journey.

As a Cuban-American, Frischkorn describes the pull between capitalism and communism, her America and her father’s Cuba, English and Spanish, but it’s also a pull between ocean and land.

The speaker proclaims, almost as if she is speaking for all immigrants,

washed on shore we lost our heritage

Birth cleaved me in half –
the sea I grew legs in
now a dissonance,
a fixed star

Such dualities play out throughout the entire collection, and Frischkorn adeptly weaves inside them images and metaphors that bring the poems back to a place of the self and its survival. The fixed star – oceanic in its depths and as fluid – is a place she seems to create in parts as the speaker reaches for her place in the world.

The titles of the poems also reveal much of this duality and searching: “My Body as a Communist Country,” “My Body Translated,” “My Body as a Revolution,” “My Body as the Tropicana Nightclub, 1952” all examine the physical self in a world ripe with complexity. The body is itself a country seeking language and stability but encountering conflict, even war.

Poems like “Exilio” and “To the City I May Not Enter” define the distance one feels from a native land or a parentage. And the gripping found poem “Black Spring” threads together pieces of an interview with a Cuban journalist arrested during the country’s violent Black Spring. It details what happens when a country tries to claim all of an individuals’ identity:

If you breathe the air

and, while taking it in,
you don’t praise the government,
you are being unlawful

The body is not safe in such a world. Identity is clearly not fixed in place, though it can find temporary homes. It’s that fixed star that keeps the self moving forward.

Perhaps one of the most striking features of Fixed Star is its precision. Two crowns of sonnets weave themselves throughout the collection, a kind of spine for the rest of the collection to build around. Likewise, the poems rooted in the complexities of a Cuban-American identity give way to mediations on Spain, a place that feels akin to Cuba in its violence but also offers the speaker music, gypsy moons, “the love letter hidden in your pocket” that becomes “your navigator, your compass.”

The speaker who claims near the opening, “I need a history more complete” has in some way discovered that. It’s a history that’s been created in part by the poet’s imaginative gathering but also a recognition of the power of that reclamation. In this sense the self is just being born. As the poem “Nascent” suggests, “she was matter between stars in a galaxy of stars.” Maybe one day herself a fixed star.

Sunni Brown Wilkinson is the author of the full-length poetry collection The Marriage of the Moon and the Field (Black Lawrence Press) and the chapbook The Ache and the Wing (winner of the Sundress Chapbook Contest). Her most recent work can be found in the Missouri Review, Terrain.org, South Dakota Review, and Sugar House Review.