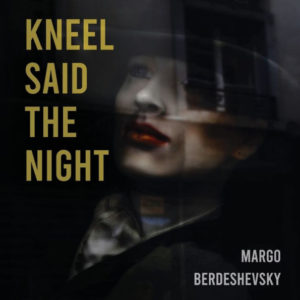 Kneel Said the Night is a hybrid collection containing poems, prose, photographs, and drawings by Margo Berdeshevsky, the award-winning author of four books of poetry and an illustrated book of stories. She was born in New York City and resides in Paris. Her “Letters from Paris” have appeared online at Poetry International for many years.

I generally read digitally, but this is a book better read on paper. The physical book itself is unusual—a black 8” x 8” square. In my opinion, the wider pages allow a greater flow due to the fewer page turns, allowing immersion in the longer pieces in the collection, and the two-page spread allows shorter pieces to resonate against each other in a way that doesn’t translate quite as well in a digital format.

My favorite piece was “New Old Wives’ Tale (or maybe—whatever become of Red Riding or the rest—)” which is more inspired by Red Riding Hood than a retelling of the well-known allegory. In this tale, the narrator who is sixty, and the gardener, Petronella, turn roses into men and themselves into wolves, or at least wolf-like predators.

We inspect like jewelers, horse traders. —What big eyes you have. One murmured, —All the better to see you with, my dear. We nodded knowingly, continued to inspect. Nails. Hair. Teeth. Shoes. Beards. Thumbs.

Here, the females are not helpless, not in need of a woodsman’s rescue or a cautionary moral, rather they exalt in their naked skin and power.

Berdeshevsky writes often about the ageless experience of being female. I could relate to lines like, “A man who promised and promised and never showed up has been writing to me again.” Or “The newest man liked the heat of her fire, the friends with benefits scenario, take two.” But she also writes about abortion, rape, childlessness; so many aspects of womanliness, but each topic is approached in an unusual way. The overall feeling of this book is a dreamy-otherworldliness. Even when it hurts.

For example, “Is it April?” is an alternate telling of The Princess and the Pea. It has a timeless truth to it, and the re-centering on the princess’s internal thoughts makes it both feel more real and also give the character agency.

A winter princess has slept poorly. It wasn’t the pea. It was—that she didn’t love anyone. Was—that she was hungry. That any god or male she believed in was cruel, & withholding. None, worth kissing.

In fact, all of Berdeshevsky’s female characters are strong, even if they are not all good—see the stepmother, called Godmother, in “Ends of the rain.”

Her poems are swirls of images, unpredictable and filled with tension until the last line. The flash prose is just liquid emotion—details chosen for peak resonance, unrestrained by heavy backstory or over-explanation. For example, this image:

But the girl had a different idea from the rest. She climbed to the copper-colored roof of the only building that had survived the tidal wave. And there, shouting, she showed her truer color to the wasteful sky. Stole its colors. Wore them. Then she demanded bleached wings, and she pretended.

The strong defiant child, who makes demands of the sky and then pretends struck a chord in me. It spoke of a figurative truth of the harshness of the world, and the inner resilience we women carry inside us.

This book is perfect for cozy, introspective winter nights, when you want to take a brief journey into lyrical metaphor and emerge with an altered view on what it is to be female in this world. The hybrid nature makes it a good choice for the prose reader wanting to dabble in poetry, and writers will enjoy the precise, searing images Berdeshevsky conveys.

Lara Lillibridge (she/they) is the author of  The Truth About Unringing Phones: Essays on Yearning (forthcoming with Unsolicited Press); Mama, Mama, Only Mama: An Irreverent Guide for the Newly Single Parent, and Girlish: Growing Up in a Lesbian Home, both with Skyhorse Publishing.  Lara is the Interviews Editor for Hippocampus Magazine and Creative Nonfiction Co-editor for HeartWood Literary Magazine. She holds an MFA in Creative Nonfiction from West Virginia Wesleyan College