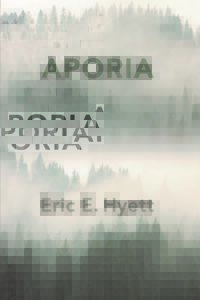 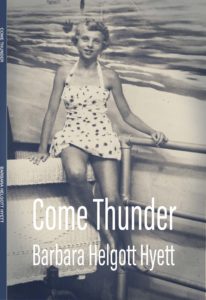 “What you write about chooses you.”
— Barbara Helfgott Hyett

Eric Hyett’s Aporia is a chronicle of a year spent helping his mother and himself to accept a diagnosis — and more, the reality — of Alzheimers Disease. Hyett, co-translator, with Spencer Thurlow, of Sonic Peace by the contemporary Japanese poet Kiriu Minashita, offers us an insightful, poignant debut collection. In addition to the spare and piercing dialogue that is judiciously employed in these poems to convey the depth and complexity of the love between a son and his mother, there is also the concurrent fact, a kind of meta-dialogue, that this is a poet writing about another poet, and with all the resources acquired from that poet’s mentorship. That understanding is the key here: not that the book needs a key: nothing about it is locked, and the door is ajar, and there is music coming from it, a duet for four hands.

Poetry is the estate his mother, Barbara Helfgott Hyett, a lyric poet of extraordinary gifts, has left him, and in Aporia Hyett shows himself to be its loving executor, true to its fruitfully strict ethos and aesthetic. It takes nothing away from his achievement here to say that he is the instrument through which his mother and teacher is able to chronicle her gradual and heartbreaking descent into incoherence and silence. As son, student, and poet, Hyett is charged with the necessity of being a witness, and in Aporia he more than fulfills that task.

Merriam Webster defines Aporia as “an expression of real or pretended doubt or uncertainty especially for rhetorical effect,” or “a logical impasse or contradiction.” Again and again in these poems we are presented with uncertainty and we encounter, with the poet and his mother, impasse after impasse; however, there is nothing pretended, or merely rhetorical here. We feel the poet is giving it to us straight, unembellished; and he is, but his careful curating of bits of dialogue and of certain memories triggered by his visits to his mother (“Mom” throughout, in a daring insistence on intimacy) is composed of hundreds of micro-choices, a sustained act of artistic intention, in service to the truth of their tragic predicament. The poems elide nothing. They give us the skinny.

In a poem early in the book, the poet asks, “is there any other word to use/ than burst?” echoing his mother’s voice instructing him while obliquely alluding to Keats’ search for “a brighter word than bright.”

Aporia is organized according to a year in which both poets, mother and son, must move toward full acceptance of the impact of the disease on their lives and relationship. In the title of each section, the season is modified (as in changed by) Alzheimer’s — Alzheimer’s Spring. Alzheimer’s Summer. Alzheimer’s Fall. Alzheimer’s Winter — as if the disease is claiming each season in turn, brilliantly underscoring that each is like no earlier occurrence of that season.

Within each section, the poems, although titled, are numbered as well, as if to emphasize the relentless progression of the disease, its intractable momentum, its accumulating oblivion. There are many poems of lament of course, but sometimes, against all odds, they flare up into small celebrations and moments of humor and tenderness. The filial bond the poems both chronicle and enact is everywhere evinced in complex ways.

For example, from the section “Alzheimer’s Fall,” 3. Razing The Tenements in Atlantic City, here are the final stanzas:

My mom wrote this

poem already — her poem —
but I guess it’s time for
me to write mine,

what that was like, I mean:
being her son,
standing in the wreckage.

Helfgott Hyett’s earlier poem of that same title, from her collection Natural Law, recounts witnessing the demolition of the tenement where she was raised:

Everywhere, violence:
of glass and shattered wood, of paint bitten
from paper, layers, stripped to a geometry.

Aporia is attentive to irony, as son and mother navigate uncharted waters. Most of its irony is suitably dark; for example, the two poets meet in a room in a “care facility:”

the lines are from the first poem of the book’s final section “Alzheimer’s Winter” when poet-mother and poet-son have begun at last to accept the tragic reality of the situation.

Together they come to understand that their time now is about dignity, not memory; patience, not problem solving; and about love in its glorious subjectivity.

The poems increase in self-possession as the situation progressively demands until the book’s final lines:

I’m the parent now,
I told the world.

In the final sentence of his back-of-book biography, Hyett writes: “With Aporia, he seeks to engage the Alzheimer’s community in meaningful conversation.” For some, this book will be a clarifying if painful reminder of the fearsome, confusing, inexorable path they have trod with a loved one; for others it may serve as intel, reconnaisance, preparatory missives from the future. These spare, exquisitely distilled poems might serve as a thin but strong handrail for the descent.

We have our own bequest from Helfgott-Hyett, her extraordinary body of work, which has yet to receive the attention it deserves, not to mention the readers who so deserve it. Lily Poetry Review Press hopes to at least begin to remedy that situation with Come Thunder. The seriousness with which she has always taken poetry, as an engagement with history, with the entire tragi-comedy of modern life, and with the natural world, will be her legacy to her many students.

In Evidence was Helfgott Hyett’s book of poems framing and curating the testimonies of American soldiers who liberated the Nazi death camps, camps in which many of her own family were murdered. In her erasure of herself in service to the voices of the liberators, the poems of that book employ the humble and effective approach Nobel laureate Svetlana Alexiyevich pioneered in documentary nonfiction. That book was not merely a work of docu-poetry, but a fierce act of defiant witnessing, trying to make sure that the testimony of these eyewitnesses, along with the outrage, horror, and sorrow in their voices, would not be lost.

Come Thunder is a retrospective of Helfgott Hyett’s work, and her new poems are scattered throughout, where they belong, not by chronology but according to their thematic relation to other poems. This way of shaping the collection honors a body of work that itself reaches backward and forward in time, a body of work largely unappreciated, certainly under-appreciated, until now. Come Thunder may just change that.

In her insightful introduction, the poet Alexis Ivy, a student and friend of Helfgott Hyett, uses the adjective defiant to describe this book. I concur, and might add devoted, attentive, responsive, and unafraid. Helfgott Hyett’s poems are shot through with desire, with a yearning for ecstasy and wisdom, while time and again they — wisely, beautifully — settle for clarity and understanding. This is from “Pickup Games”:

He told me to lift up my polka dot
blouse, show him my bra. I did,

and saw on his face what breasts were.

And, from “Health Class”:

I thought of the first wave
that ever took me under, riptide
I had wrestled with all my strength.
Part of me drowned, made two
children of me in one….

The poems about her childhood are more than nostalgia, and there is not a shred of sentimentality in them. Consider these lines from the first section of “All Night the Waves”:

… My name is Sleepy. The bear

will not be quiet. My parents
forget me from the living room.

Not “in” the living room but “from” the living room. With that preposition we enter deeply into the child’s subjectivity and we remain there for several poems that explore that subjectivity with appreciation, honoring not only that child’s resilience and bravery, but childhood’s, which deserves, always, to be remembered and understood.

Sometimes a stark statement of fact takes on the resonance of an axiom —This is from “Making Do”:

Not everything is
possible but you
are a child and do
not know that, so you…

When we turn from the childhood poems, we read the others, engaging so much of history, family, the natural world, through the wide, unblinking eyes of the child.

Later, in “To Be a Sloth,” Helfgott Hyett writes,

Who will love me now that I
have shown how brave I am?

With Aporia for context, we read those lines differently than we might have earlier. But Helfgott Hyett’s own brave work, across seven volumes and as represented in Come Thunder, is reason enough to love her, to seek out her work, to read her for the chance to understand something new about life, which was always new to her, always with something to offer. As she writes in “Light Keeper’s Daughter,” the first poem in Come Thunder:

Clockwork: the whole world
a semaphore of sound. Her heart
was a chapel in that dark, a love
so big it scared her. Her hair
iced by the sea: wild and fire and full
of the spit of life. Brave she was
and leaned on herself out there.

Thinking about these two books together, I have come to prefer the Websters’ 1913 Dictionary’s definition of “aporia”: “a figure in which the speaker professes to be at a loss what course to pursue, where to begin to end, what to say, etc.” In both, the profession is authentic, and the starting place for a poetics that will explore that “etc.”

Richard Hoffman poetry books include Without Paradise; Gold Star Road, winner of The Barrow Street Press Poetry Prize, and the Sheila Motton Book Award; Emblem ; and Noon until Night, which received the 2018 Massachusetts Book Award for Poetry. His other books include the celebrated memoirs Half the House and Love & Fury, the story collection Interference and Other Stories, and the essay collection Remembering the Alchemists and Other Essays. He is Emeritus Writer in Residence at Emerson College and Nonfiction Editor of Solstice: A Magazine of Diverse Voices .