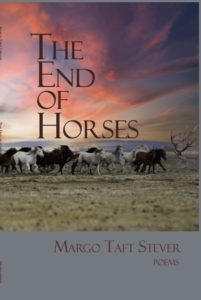 “The End of Horses” is a book title that puts the concept of finality squarely in the reader’s view. It challenges the cognitive dissonance that enables us to go about our lives unhampered by the despair of living in the earth’s sixth mass extinction — and the first mass extinction caused by our own species.

Some of the poems in this collection are sure to become iconic and widely anthologized in collections responding to environmental degeneration and the crises it causes for wildlife and domestic animals across the globe. Margo Taft Stever’s signature gift as a poet is being able to render these horrors with a steady accounting of detail while maintaining compassion and acknowledging beauty.

Consider “Ghost Moose,” in which global warming enables overpopulation of ticks that literally suck the life out of moose calves:

killing them slowly; their mothers
witness starvation from blood loss.

Or sit quietly with “Ballad of the Dolphin,” a poem that chronicles tactics used by the tuna industry to remove dolphins from their nets and as competition in the water:

… If any
of you were still alive when they slung

You on cement, they stabbed you.
How last survivors churned

The water red, leaping in panic,
waiting to die …

How they used the screams
of several to slaughter more.

How one of you hangs from the prow,
still alive, calling, calling.

Poems in The End of Horses present jackrabbits, rats, slugs, hogs, Canadian geese, beavers and other animals caught in nightmare of factory farming or collapsing habitat.

… Head down, the quieted
horse ploughed through grasses,

his massive form sleek, willowy.
So much did they long for the beast’s
velvet nose to be buried in their arms.

The power of family ties and connection with the natural world is evident in poems including “Calling Mother After She Died.”

Nothing about you lacked
intensity — forever
burning tree.

The titular poem in The End of Horses seems to offer an apocalyptic vision of what can happen when those in power are indifferent to the suffering of living things:

I write to you from the end
of the time zone. You must realize
that nothing survived after

the horses were slaughtered.

We do not know whom to blame

or where the horses were driven …

… The generals
and engineers pucker
and snore on the veranda.

And yet, this isn’t a book that makes sweeping judgments of those who profit from environmental annihilation. There is awareness of humans caught in the trap, as well.

“Blinded” offers some hope, even as it calls up the 1909 Cherry Mine Disaster in which 259 people died when a kerosene lamp ignited hay for mules that spend their lives deep underground, eventually going blind. Still, there is the kindness that brings hope:

Once, miners brought a mule named Tim
to the surface for retirement after he had toiled
for decades. At first, they turned him out
at night to avoid the light. At sunrise, all Tim
could do was nuzzle the green spring tufts
until he noticed a cow eating, and he tried
munching grass, his new heaven.

In the end, the fusion of horror, love, awe and hope make The End of Horses an emotional reading experience. I sat and cried, finishing the book at my kitchen table. I want more people to experience this kind of haunting. It changes us. This is why I read poetry, and this is why I write.

Lynn McGee (www.lynnmcgee.com) is the author of the poetry collections Tracks (Broadstone Books, 2019) and Sober Cooking (Spuyten Duyvil Press, 2016) as well as two award-winning chapbooks, Heirloom Bulldog from Bright Hill Press and Bonanza from Slapering Hol Press. Lynn McGee and Jose Pelauz are co-authors of the children’s book, Starting Over in Sunset Park (Tilbury House Publishers, 2021). Lynn’s work is forthcoming or appeared recently in The North Dakota Quarterly, The Atlanta Review, Lascaux Review, Night Heron Barks and others. She is a communications manager at Borough of Manhattan Community College (BMCC/CUNY).