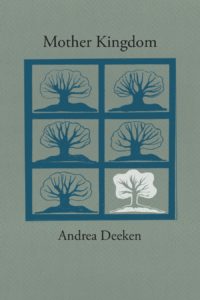 With Pride Month just having ended and given the Supreme Court’s latest ruling, an epigraph as ordinary as “For my wife and daughter”—found in Mother Kingdom, the 2022 Slapering Hol Press chapbook winner by Andrea Deeken—feels wildly affirming to me, a lesbian who has watched the concepts of family and women’s autonomy evolve over decades.

The collection presents fourteen narrative poems that rise with matriarchal revelation and pride. The opening poem, “Lineage,” has a title that reflects a concept running throughout the collection: the inheritance of violence and love. The speaker reflects on her own childhood as well as that of her mother:

…three girls
in a row, picked
off one by one, lined up
like the cans of Budweiser
he’d drink for dinner.

Framing the domestic in such a way that it resonates with social significance is a talent Deeken yields with ease. A girl, or rather, the concept of girlhood, and the role of guardian in the literal sense—one who guards—is also introduced:

I wish I could put you
high upon a shelf, away
from the hands of these
kinds of men.

The lineage specific to the speaker—“these kinds of men”—falls into the complicated embrace of family, as in “Tardy Slip.” The speaker’s father hits a dog as he’s driving her to school,

… and though I still haven’t
forgiven him, when he rolls another cigarette,
I take the wheel.

The speaker continues to establish her own agency, her choice to “take the wheel,” and the narrative arc climbs with hopefulness in “First Kill.” Two children old enough to embody at least an unconscious glimmer of sexual energy (and mature enough to be taken on a deer hunt) find a magazine “… with all those women,” and that night, they share a sense of triumph: “… we dined like kings.”

The thread of longing in various forms is strong in Mother Kingdom, and emerges with certainty in “What Is a Mother?”:

A mother washes and washes
her hands, says things like next time or
ask your father but mostly a mother
slowly and suddenly starts to disappear…

… a skinny girl biking on gravel
looking for something, a way
to feel full.

A hint of suspense is created. When will this longing, this homesickness be sated? The answer emerges as the speaker herself becomes a mother and admits, as in “Borscht,” there are

… so many ways
to be a mother,
even to myself.

Alongside revelations about being mothered and being a mother, Mother Kingdom asserts its strength in the quiet unraveling of images, as in “Poems for My Daughter on the Day They Announced the End of the World.”

The speaker learns that scientists have underestimated the warming of the ocean, and this news is woven into the challenge of staying current with household responsibilities and parenting, itself. A pot nearly boils over,

…catching
the thin skin of my wrist,

and the newscaster declares,

It seems the earth is more sensitive
to climate than we realized.

Deftly tapping into the experience of family and rendering sharp truths is the bedrock that distinguishes Mother Kingdom, a first-book contest winner. This luminous beginning is a beacon for more books to follow. I recommend keeping it in sight.