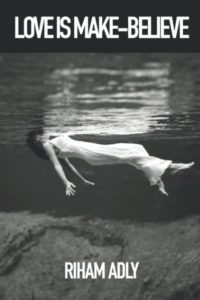 I personally love story collections in the summer—the small bits fit nicely into a busy schedule and the time away from the book allows the words to linger, as I roll them over in my mind. I had heard about Riham Adly’s flash fiction collection, Love is Make-Believe, and jumped at the chance to review it. An award-winning writer from Giza, Egypt, her website states,

For starters I’m rebel at heart who believes in doing what she loves for a living after ditching dentistry for a career in writing and teaching and moderating book clubs.

Love is Make-Believe is a first flash fiction debut written by a  female from Africa and the Middle East and published in English.

The book is divided into seven sections, each one beginning with a disturbing yet beautiful black-and-white photograph. Several of the essays were published previously and were nominated for or won various accolades.  Taken together, these stories are both singular and universal.

A surreal, metaphoric journey between lives, her prose reads like a series of dreams. The story, “How to Find Your Wow Wow,” speaks to unfulfilled longing and dissatisfaction in a hazy, otherworldly way. This feeling of floating in and out of women’s stories, even if some of them were hard for me to parse, together weave a tapestry of dissatisfaction and longing like poetry.

Perhaps my favorite was “Picture Perfect,” which captures the moment of the early pandemic in a new way—through the eyes of a woman with a crush. In just one and half pages we experience the franticness of the spring of 2020 but with a unique lens. What is a crush if not hope for the future? And as we all experienced, the pandemic eradicated our simple daydreams.

And while “Picture Perfect” is universal, “Release” is decidedly Middle Eastern, portraying an observant Muslim mother, abused repeatedly by her husband, who is convinced her daughter is possessed by a djin. This story, too, is tinged with the other-worldly, as the narrator states,

I woke up to a deep knowing that broke out from the depth of my soul: All realities were unreal until I decided to dream them into being.

We return to present times with, “What Happens When You Drink Whiskey During a Retrograde in a Pandemic,” written as a diary entry. The narrator remembers sexual assault and exile, and the piece again resonates with longing and discontent.

Several of these stories experiment with form, making it an interesting, unique read. Adly’s distinctive prose is both unexpected and somehow familiar, speaking to the female condition.

Lara Lillibridge (she/zher) is the author of  The Truth About Unringing Phones: Essays on Yearning (forthcoming with Unsolicited Press); Mama, Mama, Only Mama: An Irreverent Guide for the Newly Single Parent, and Girlish: Growing Up in a Lesbian Home, both with Skyhorse Publishing.  Lara is the Interviews Editor for Hippocampus Magazine and Creative Nonfiction Co-editor for HeartWood Literary Magazine. She holds an MFA in Creative Nonfiction from West Virginia Wesleyan College.