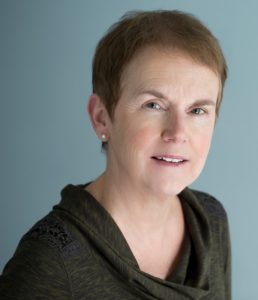 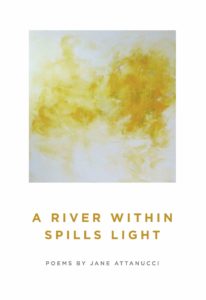 In A River Within Spills Light, Jane Attanucci’s debut full-length poetry collection, she melds being a mother, a grandmother, and a daughter whose mother died prematurely in both form and free verse. Attanucci is open with her experiences throughout. Her language is friendly and familiar, inviting her audience in as confidants. This a debut from a writer over fifty who is liberal with wisdom and grace.

The book begins with the poem “Perhaps I Should Tell You,” which serves as a convocation. Here, she establishes the conversational style that sets the timbre of the entire book. Attanucci uses approachable language and clean lines. The poem begins with the lines “I didn’t write a single/ poem, before my / parents were gone,” letting us see her writing as if we were friends or fellow writers with whom she confides in. The word “perhaps” is repeated in the fourth line and the forceful P plosive extends to the final stanza with “pale skies,” “Piping plovers,” and “page.” It is a rich, short poem about mourning and writing, which ends with a comma, suggesting that it continues.

The second poem, “3725 Frazier Street, 1965,” is a pantoum that gives more insight into the speaker’s childhood. She is “The oldest girl” with more responsibilities and longer memories. This poem starts with the mysterious claim of “I was the first to smell the smoke.” Is it a house afire, or is it “forbidden cigarettes”? Later, the lines “soot-stained windows, painted bricks, / home with diapers, dishes, long division. / My mother’s house still stands” imply both a fire and mischief without fire. Eventually, we learn that the speaker is the oldest of seven and accountable for a lot, the house is in Pittsburgh, and she has left the city which created her: “O Pittsburgh, my font, my wellspring,” the poem laments.

Maybe the poem has a clearer meaning, but an indefinite interpretation garners intrigue and like “Perhaps I Should Tell You,” the second poem urges the reader to continue.

The collection is full of openhearted poems about losing a mother at a young age, about growing older, and about raising families without a maternal example.  In some ways, the book reads like a journal we have somehow become privy to.

In the poem “Note from My Younger Sister on the 36th Anniversary of Our Mother’s Death,” there are similarities to a diary entry, but we find parity with the weight of her mother’s death had on the speaker and her siblings in those last two lines: “We were told to stay away, not to watch / her body being removed.” Not for nothing, thirty-six years is a long time to mourn someone.

Attanucci understands how to close a poem. In “I didn’t want to turn away,” when she contemplates a mother mother robin, she ends with the lines, “Tell me what you told me this morning … / tell me again and again.”

Hindsight and forward thinking are at play throughout. It is her past in Pittsburgh, but it is also the past as a mother herself, and the present as a grandmother. In poems like “A New Year’s Eve Heart-to-Heart,” we see the speaker with her grandson, standing on the coffee table and understanding the difference between his mother’s and his grandmother’s potential reactions. We see it again in the poem “DeMeter to her Eight-Year-Old Granddaughter,” where Attanucci presents a relationship as fleeting as tide water on sand castles, how the care of the child comes and goes for the grandmother.

Attanucci does not only address family and matrilineal relationships. She addresses contemporaneous topics, such as COVID; in the poem “Easter, 2020,” there seems to be a resurrection, but one without human touch. There is also a nod to gun violence with the poem “A Teacher in Every Gun Shop.”

The collection ends with the poem “Epilogue: A Cento,” another form poem that addresses the fire mentioned in “3725 Frazier Street, 1965.” The line “I was the first to smell the smoke” and the ambiguity of what the smoke is clears up.

A River Within Spills Light has a lightness to it in spite of some of the heavy topics. That may be because of Attanucci’s educational background. She studied human development and holds an Ed.D in the discipline from Harvard Graduate School of Education. This is an accessible book with expectations of a receptive and knowing audience.

DeMisty D. Bellinger is the author of the poetry collections Rubbing Elbows and Peculiar Heritage and of the novel New to Liberty. She teaches writing in Massachusetts, where she lives with her husband and twin daughters. You can find her at demistybellinger.com.