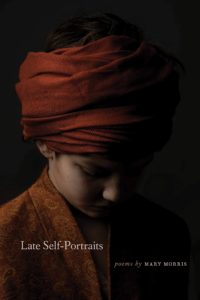 Mary Morris’s most recent book of poems—her third—draws its title from Rembrandt’s “late self-portraits”—three paintings he did in the years preceding his 1669 death at the age of 63. At the time, he had lost his wife, his beloved son Titus, and his money. The suffering is evident in Rembrandt’s face, but for many, the paintings also depict an inner light, a sense that he is on the brink not of death but transfiguration. Others see the portraits in less uplifting terms, as studies in bodily decay, with their sad eyes, wrinkled, blemished skin, the paint thickly laid on, the brush strokes visible. Morris’s poems address this tension, wondering whether fleshly ailments can offer insight along with pain. Her epigraph, from Clive James, suggests the answer is yes: “I thought that I was vanishing, but instead I was only coming true.“

The question is particularly urgent for Morris because she has herself suffered from epileptic seizures. Some poems evoke her own seizures; some depict others prone to such out-of-body experiences—the Salem witches, Joan of Arc, Harriet Tubman, Marie Laveau, Marie Curie, Frida Kahlo. Gods, angels, animals, snow, and ghosts work in the poems as light does in a Rembrandt, hinting at something revelatory that is both within and outside us.

In “Gods of a Grand Mal,” for example, a ghostly “They” causes “grave     electrical disturbances     in the brain.” The speaker lingers “Between breath   and death     fading voices   of ghosts” till she wakes to “hear my son singing from his crib.” There follows a gorgeous image of strangeness reassembling itself into daily life:

an assimilation   appears   behind windows

whispers itself into curtains.

The extra spaces, irregular punctuation and broken syntax give the poem a frozen, static quality, the sense of a moment broken open; a “brain shimmer,” as the speaker calls it in “Epileptic.”

Many of the poems that don’t depict illness or extremity focus on artwork—another kind of “brain shimmer.” Picasso, Basquiat, Francis Bacon, and Caravaggio as well as Rembrandt make appearances. Here is the opening of “Rembrandt, Late Self-Portrait,” the poem which opens the book’s second half:

he forfeits the mirror, eating pears

with a glass of time, listens to snow

While the “broken blood vessels” and crimson paint emphasize the body’s materiality, the Rembrandt within the painting “forfeits the mirror,” attentive to that other world “behind memory” where snow falls: a spiritual space at once inside and outside the body.

“Ars Poetica”—the traditional title for poems exploring the poet’s rationale for writing—suggests this other space is where the poems come from:

I didn’t know   the day would be

a set of green stairs

that I would be climbing outside

There’s a surreal quality to these poems—a dream-logic that makes them haunting and hard to paraphrase. But I think that’s precisely the point. Life at times forces us beyond the point where things make sense.

In a few poems, Morris breaks open words themselves to see what’s beyond. Her poem “Inclusion,” plays with repetition and difference to create a fugue-like intricacy: “See how author is included in authority,” the poem begins, then points out the leach in bleach and the rave in raven. All these inclusions culminate in the final stanza:

In poems such as this, Morris uses explicitly Christian imagery to evoke what’s beyond. Biblical allusions, madonnas, angels, saints, and rosaries recur. Other poems are less specific, referring to plural gods or “foreign” universes, or even those green stairs to evoke that space beyond.

There are no dramatic revelations in Morris’s poems; only a shifting of the lens, sharpening our vision over the course of the poem. The poems are like postcards from a place where death, dream, and illness border each other, where “Flesh” borders on “not flesh,” as Morris writes in “Portrait of Caravaggio Painting Death of the Virgin.” Or, as she points out in “Last Supper”: “We die, but we roll/stones from our caves.”

A graduate of the University of Oklahoma, Morris lives in Santa Fe, New Mexico. Her first two books of poems, Enter Water, Swimmer (2018) and Dear October (2020) were widely praised. Late Self-Portraits, which won the Wheelbarrow Books prize, offers a strange and powerful glimpse of what it’s like to walk through the world suffused with a sense that something like transcendence hovers just the other side of daily life.