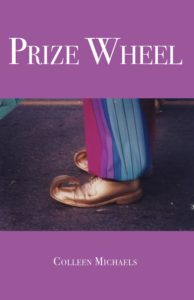 Colleen Michaels invites us into a world of sweet, fatty foods, illusion, and games of chance, where we might land at Foxwoods Casino, Paragon Park, Coney Island, or perhaps, a local bakery to buy blueberry donuts. The poems in Michaels’ debut collection, Prize Wheel, are as thrilling and dangerous as a carnival. Fanned out into six sections, the book is as breathtaking and as specific as fate; the poems guide us through and out of a funhouse maze, one filled with creativity, costume, danger, and a mother’s love.

The first section, “Beat the House,” introduces us to creation as a form of survival. In the poem, “Honorable Mention,” the speaker in the sixth grade decides to “grow a spine” by pocketing “spools of thread” from her mother’s sewing kit, and “unravelling until they are clean bones.”

between these bones I sandwich
my father’s poker chips. . . .

I stack from my father on the back
of my mother’s mother
string disc to spool with fine filament.

Michaels’ use of the term bones—another word for dice—paired with poker chips “ups the ante.” The speaker is gambling on her own ability to survive, to transform. Food also becomes integral for the speaker’s survival. In “Conflict Resolution Through Soup,” the speaker claims

My soup turns battles into cook-offs, whisking
aggression into bisques and soft broths.

The mother, too, is a kitchen-witch, binding this “mayonnaise family” with sandwiches that won’t spoil because she used mustard during their long days at Paragon Park when “we stayed through two packs of cigarettes,/four rides one carousel . . . .”

The magic of transformation is honed in “Sleight of Hand,” the second section. In a masterful villanelle (a poetic form of incantatory repetition), “Maggots and Milk,” Michaels uses the obsession of this literary structure to entwine horror and food with trauma and love. By repeating the line, “In every childhood fear there’s a thrill,” Michaels recreates a carnival ride—a roller coaster—that can only repeat its course of climbs and drops:

It was the spill of maggots. My mother would kill

for me. She scalded water and doused down until
my jelly-toed sandal was safe. She swore
in every childhood fear there’s a thrill.

If the speaker, like her mother, is gifted with the ability to transform and protect, she is also burdened with the weight of silence. In the ekphrastic poem, “Stink Eye in the Voice of a Tablecloth,” the speaker is this piece of cloth—merely a witness—that must be “considered, dealt with.” The tablecloth at a picnic observes the powerful silence in the family that sits on it, where no one comments on “the quality of the potato salad./It is an old family recipe. And it is ours.”

In the third section, “Easy Mark,” the speaker describes herself as “overflowing with small concessions.” In this section, the speaker bargains, haggles, bets. In the poem, “The More Weighted the Purse,” set in Foxwoods Casino, Michaels opens with “The more weighted the purse, the more necessary the woman.” The worth of “first of her sisters to die” is merely “a comb and a Saint Anthony medal lost in the lining.” The risk is the value of the woman. Michaels lays down big bets in this section, where the child in “Tasting Red” bleeds to have something in her mouth.

I could eat a bag in minutes,
swallow until my throat
burned sugar.
I stopped cutting
through the yard

after I hooked my leg
on the fence.
Sliced clean, my kneecap. . . .

The speaker claims her power—or earns it—in section four, “Test Your Strength.” The image of sewing from the first section reappears in “Whereby I am the Broken Wooden Hem Guide,”

Again in the dream of sewing notions
and already I hunger to be the silver teeth
of a vintage separating zipper. . . .

I dream, I woke, and I work
like a miracle mouth, hinged oil.
Like a lace maker’s hardened thumb.

As the speaker transforms into the protector/mother, they both become poets. When “dad went off script in technicolor,” in the wrenching poem, “After My Mother Refuses the Restraining Order Against My Father,” Michaels concocts a magic brew of food, poetry, and movies.

Her only poem, a list of
food to restock the fridge:
paper towels, bread, rotisserie chicken.
I get the cheap, generic brands.
I dent the wonder—the last soft thing.
My mother taught me mean is a silent film star.

This “Illusion Show” in the penultimate section basks in the glamor of spectacle and costumes. In “Ars Poetica,” Michaels observes that “so many of us with props that say look over there, pay no attention to the shark cage I’m wearing.” In a masterful palindromic poem, “Reversible Dress: An Apology,” we are warned that “Ease is just a fabrication/based on cutting lines.” Remaining true to the book’s use of transformation, Michaels turns words like “repair, bias, white as a flag” into an apology from a mother to a child; a sewing lesson into sadness, “I thought I could repair it.”

The final section, “Winner, Winner, Chicken Dinner,” is a bitter-sweet closing. There is a softness to the poems, “a humble gathering at the top of the pot,/caves of flavor, sweet or pungent, of our own making.” The voice is resigned, yet healed—or healing. In “Race Point After Illness,” Michaels writes

The windsock windmills hello or goodbye
along Route 6 then drop its ribbon arms.
I hold a new sadness for stillness before storms. . . .

The food remains delicious and cheap—diner food, carnival food—but it is sweet and prayerful. In the end, Michaels’ poems morph from spells to prayers, recipes, as in “For the Buyer of Breakfast in Salem,” where the speaker “bought dessert for the couple two tables over,/it tasted sweeter than cannoli.”

The poems in Prize Wheel take hurt and fear and spin it into “something sweeter.” Where is this place—this carnival, this take-out restaurant with posters of Farrah Fawcett, this fall festival? Where are we led by the sure hand of a poet, a seamstress, and a mother? I will return to Prize Wheel again, to explore these places of “cage dancers/in chandelier earrings and tight good jeans.”

Jennifer Martelli (she, her, hers) is the author of The Queen of Queens (Bordighera Press, 2022) and My Tarantella (Bordighera Press), awarded an Honorable Mention from the Italian-American Studies Association, selected as a 2019 “Must Read” by the Massachusetts Center for the Book, and named as a finalist for the Housatonic Book Award. She is also the author of the chapbooks In the Year of Ferraro (Nixes Mate Press) and After Bird, winner of the Grey Book Press open reading, 2016. Jennifer Martelli has twice received grants from the Massachusetts Cultural Council for her poetry. She is co-poetry editor for Mom Egg Review and co-curates the Italian-American Writers Series.