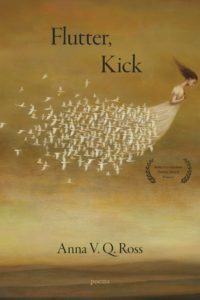 Winner of the 2020 Benjamin Saltman Poetry Award, Flutter, Kick is a taut new collection that vaults between a Zenlike focus on moments, and meanderings that alter what is seen. Divided into four sections, the collection opens with the poem House. This poem twists its way from a memory to the history of a house where …”someone attached a lock/on her bedroom door and didn’t say why…” (p. 11) Like many of the poems that follow, the first section sets up a dark history of a place attached to a childhood memory. In some poems, expectations contrast with experience and one must decide what to carry forth and what to let go.

In Self Portrait as Girl, the second person narration has a feel of authenticity, as if the reader was dwelling for a few moments in the mind of a young girl. “In the absence of dogs/you were brave about dogs.” (p. 12) This line may just sum up more than a few poems in this section. The author, “…named/for that woman in that famous Russian novel…” (p 15) writes a series of self-portraits, each with a different twist on reality. It is clear that tragedy is always close, as in the poem Self-Portrait with Alternate Ending where a young family with a toddler in a stroller comes perilously close to a random shooting. The police reassuring them that they were never the target seems beside the point. The narrator of many of these poems reconciles horror with the day-to-day task of raising children.

In the second section, the poet focuses on the juxtaposition of violations that range from historical (Christina Blasey Ford testimony before the Senate Judiciary Committee) to the personal, including a sexual violation by a cousin when the narrator was changing out of her bathing suit. “The poem doesn’t know why he let go, leaving/the door flapping after him,/useless as a single wing.” (p. 35, 36)

Danger is elusive and Anna V. Q. Ross finds it lurking where young boys are boogie boarding, and ignoring the warning sign that sharks are nearby. She harvests poems from news headlines, including one about a woman who threw herself upon her son’s coffin after a shooting in Dorchester, MA. A litany of tragedies are paired with mundane events such as driving a daughter to dance class or explaining the use of tampons to a young son who finds the box on the back of the toilet. The collection is not chronological, weaving back and forth between babyhood and pre-teen years. A train ride to work that passes the school her children attend brings to mind an advertisement for bullet-proof school supplies and the image of rows of six-year-olds hiding. She deftly epitomizes the country as a place where active shooter drills are held in every school. guns outnumber people, and locked doors are a part of daily life for schoolchildren.

In the final section of Flutter, Kick, Anna V. Q. Ross shows her range with a poem about gardening and the random nature of what thrives, paired with the vitriol of a woman at the abortion clinic who screams and spits. A poem about a letter sent home to parents about a math unit reminded me of the ways schools try to involve parents in education, only to present overworked parents with yet another measure of their own worthiness. The poet also takes on the expectations of our algorithm based world with the poem, The Algorithm Thinks I Need a Girdle. Many of us have puzzled over pop-up ads designed to market to our perceived flaws. In the final poem, an ekphrastic, One Time, the poet is responding to a painting by Shelly Julian Bunde about Mrs. Lawrence Schlegel who left her family but then came back. “It had been for good when she left,/all of it, she knew, and also/that someone would need/a last drink of water now,/and a song from when you were little.” (p. 91) Anna V. Q. Ross’ second collection of poetry has a laser focus on modern atrocities but she blankets readers with the questions of children, and the “two brown eggs, smooth and almost warm,/which you carry, one in each hand,/back inside the house.” This is a collection rooted in today’s America, in all its humanity and pain. Read it for its fearlessness.

Anna V. Q. Ross’s previous poetry collections are If a Storm and the chapbooks, Figuring and Hawk Weather. Her awards include the Robert Dana-Anhinga Prize for Poetry, the New Woman’s Voices Prize in Poetry, and fellowships from the Fulbright Foundation, the Massachusetts Cultural Council, Sewanee Writers’ Conference, the Virginia Center for the Creative Arts, and Vermont Studio Center. Her work appears in Harvard Review, The Nation, The Paris Review, The Southern Review, and other journals. Anna is a poetry editor for Salamander and teaches at Tufts University, where she is a lecturer in Poetry, and at MCI Concord through the Emerson Prison Initiative. She lives with her family in Dorchester, MA.

Lisa C. Taylor is the author of five collections of poetry, most recently Interrogation of Morning (2022). She also has two published collections of short fiction. Her honors include the Hugo House New Works Fiction Award , Pushcart nominations in fiction and poetry, and fellowships from Tyrone Guthrie Centre in Ireland, Vermont Studio Center, and Willowtail Springs. Lisa publishes both in Ireland and the U.S. She teaches online for writers.com