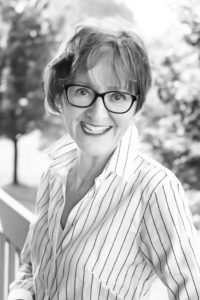 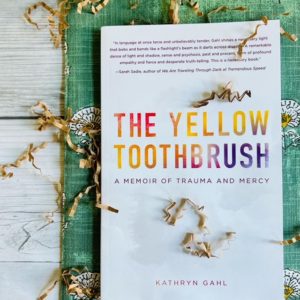 What does a mother do the day after she visits her daughter in prison? How does a mother reconcile—find compassion—for a person who is guilty of the unthinkable? What if that daughter, like you, is also a nurse, a mother reeling from abandonment by her husband and her father, what then? What if that daughter, when struck by the perils of perinatal mood disorder, committed filicide?

For award-winning, multi-genre writer Kathryn Gahl, these aren’t questions to be taken lightly. Forgiving and loving aren’t options, they are ‘built-in.’ The Yellow Toothbrush (Two Shrews Press, 2022) is a moving poetic memoir about past and present, sense and psychosis, life and death.

I am struck by how Gahl is continually in the process of acquiring insight rather than dispensing it…On this day, I am not a new mother nor am I sleep-deprived/Yet I too/figure he will come back.

Repeating mantra, “The day after I visit my daughter in prison,” Gahl’s poetry, like a chorus of a newsreel, cycles in fits and starts. She is unsparing, highly observant, at once sharp-edged and lyrical. The Yellow Toothbrush is a tale you didn’t know you needed to read until you do, and then, you can’t look away.

Please join me in conversation with Kathryn Gahl.

Leslie Lindsay: The Yellow Toothbrush, inspired by a horrific family event, the death of your grandson at the hands of your daughter, with echoes of paternal abandonment, is an interconnected series of more than sixty poems. It hangs together beautifully, tragically. I didn’t want to stop reading, and yet, the subject matter is so disturbing. I am curious how you decided to structure this as a poetic memoir, a genre I’m not entirely familiar with (but love)? Why this form and not, say—a traditional memoir narrative?

Kathryn Gahl: It was not a conscious decision. It evolved after I stood on Storycatchers stage in 2017 for Mental Health Month—my oral storytelling unfolded like a conversation, a talk I titled, “I’m Going to Lose My Mind,” referring to Nora’s mind.

For months after, I was driven to write, doing what I’d done for decades: put art to work when things got tough. My heart was broken and my brain was mush. In that addled state, I did not know I was writing Something Big. Say, A Book. I was only processing, writing after every prison visit about worlds unknown to me as I scribbled on yellow pads, jotted notes while driving, scrawled on tear-stained pages. The mélange expanded. I typed it up, printed it, bawled, and submitted a piece here and there; some were published. Still, I never thought of gluing them together into something with a narrative arc.

Leslie Lindsay: Like you—like your daughter, too—I’m a [former child/adolescent psychiatric]R.N. and mother. My own mother devolved into psychosis when I was ten. What I think much of what you are doing in The Yellow Toothbrush is bringing awareness to perinatal mood disorder. There’s also an intergenerational component to all of this as well. Can you speak to that, please?

Kathryn Gahl: My head exploded with new data about trans-generational trauma, intergenerational trauma, and whoa, epigenetics. Even before the forensic psychiatrist Phillip Resnick, MD, an expert on filicide, found the missing link with her father’s abandonment, her uncle wrote from Holland, “Her father stood at the base of what Nora did. He was unpredictable and headstrong, absent most of the time, and in the end, he totally disappeared. She must have felt despair, anger, and disappointment. Those ingredients have formed her.” So yes, she carried her father’s World War II traumas. The Body Keeps the Score: Brain, Body, and Mind in the Healing of Trauma by Bessel Van der Kolk, MD, helped me understand—too late—how Nora was vulnerable to PMAD (perinatal mood and anxiety disorder).

Leslie Lindsay: Insights literally blister on the page as you lift the veil on some of these darker truths, as you begin to tease out the possible explanations: your daughter was abandoned by both her fiancé and her father. She was sleep-starved, working overtime, caring for an infant. You also take a moment to explain some of this, in gorgeous prose:

After her Papa’s hot-headed split led to her to believe/she was/ “globally unlovable”/ is what Dr. Resnick wrote in his forensic report.

You go on to explain how ‘it sounds crazy,’ inferring that childhood traumas could lead to such a tragic end. I’m curious if you could expand on this? What are some of the risk factors for perinatal or postpartum mood and anxiety disorders (PMAD)? Do all perinatal mood disorders result in filicide?

Kathryn Gahl: All perinatal mood disorders do not result in filicide if diagnosed and treated (with medication and therapy) right away. A supportive partner is key. According toe the American College of Obstetricians and Gynecologists, risk factors for PMAD are depression during pregnancy, including maternal anxiety, life stress, history of depression, lack of social support, unintended pregnancy, Medicaid insurance, domestic violence, lower income, lower education, smoking, single status, and poor relationship quality.

Nora had eight of twelve risk factors before birth, and six of eight risk factors for depression after birth, including the baby on a home bili light (for jaundice), with all the care on her. ACE (adverse childhood experiences) also increased her risk. Lastly, as a pressured working mother, she, like many modern mothers, never enjoyed what researcher Reva Rubin called “the restorative period”. Instead, she experienced “intrusive thoughts”, a contradictory idea that can splinter a new mother’s brain.

Leslie Lindsay: I want to talk about the epigraph you chose for The Yellow Toothbrush, which really encapsulates the entire memoir,

“There is always a wicked secret, a private reason for this,”–W.H. Auden, VII—from “Twelve Songs”

Similarly, it reminds me of a Grace Paley quote, “What we write about is what we don’t know about what we know.” Which I think is saying: we start with a moment we have some knowledge and experience with, but in writing, we aim to reveal the half-seen, the obscure, the hidden, flickering, inexplicable sparks that lie in the dark.

Can you speak a bit about your process? Did you really write these pieces the day after you visit your daughter in prison (I love that repetition, by the way), which I assume was over the course of many ‘day-after’ visits? How did writing illuminate your feelings and experiences of marriage, motherhood, family, and trauma?

Kathryn Gahl: “Wicked” can mean fierce, vicious, or going beyond reasonable limits, though a lazy reader would think of evil—which was the uninformed judge’s word choice. This and many other hidden reasons propelled me, including my feelings about the abject ignorance of the district attorney, public defenders, and the judge who discounted104 letters written as testimony to her kindness and competence.

And yes, I really wrote each entry the day after visiting my daughter. How else could I process my cascade of grief? Drink? Drugs? Harm myself? Harm others? Seek revenge? Run away to primal screaming, a sweat lodge? My second career, writing, muscled up and I wrote like the mad woman I was, playing my best suit, poetry. Poetry creates urgency, puts compression on the language, demands an exact word to hit hearts. It says more with less. “Appeal to the subconscious by saying less,” wrote Stanley Kubrick.

As a vortex of truths swirled, they needed white space on the page, not single-spaced sentences squeezed together, then chucked into paragraphs. The eye needs room to breathe. Hence, poetry. But put the pieces together to create forward motion, pacing, a through-line? Impossible. Even a memoir class did not help. And so, I gave up!

That’s how a new form emerged, nameless. Call it touched by the angels or the Feminine Divine—a mystical aura came over me, tapping the source of creativity. It was the silence of a human soul wanting only to be heard. And I listened.

Leslie Lindsay: Finally, I want to end with a call to action. The Yellow Toothbrush brought the unimaginable to the forefront: a new mother unhinged by the ravages of anxiety, severe depression, OCD, paranoid thinking, sleep-deprivation, and a demanding work schedule, led to the death of her fourteen-month-old son. Immediately after, she attempted suicide, but did not succeed. It’s a truly devasting and harrowing tale. Unfortunately, this is more common than one might realize. It’s also about justice, awareness, and stigma. Had this occurred in (many other) states or countries, and not Wisconsin where your daughter lived, she would not have gone to prison, but a mental health facility.

What can others do? What are you doing? And can you provide a little insight on how your daughter is doing now?

Kathryn Gahl:  What can others do: help decriminalize post-partum disorders by signing the www.change.org/yellowtoothbrush petition, listed in the back of the book. Contact me for ways to help meet Nora’s current needs.

What am I doing: Educating others on PMAD. Seeking a lawyer to reduce Nora’s sentence. Finding legislators to decriminalize post-partum disorders. Supporting prison reform that focuses on rehabilitation, not punishment.

How is my daughter doing now: She keeps to herself, will trust no one in a place where control supersedes compassion. She endures bullying. She eats much peanut butter purchased from canteen, disdaining prison food. She has stopped writing long letters to many because she can only report negativity and inanity, causing her to relieve each episode. Instead, she reads The Atlantic, the Smithsonian, People, and The New Yorker. She does Sudoku and crossword puzzles, responds to emails. She talks to her brother and me until the phone call cuts off at fifteen minutes. 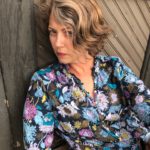 Leslie Lindsay’s writing has been featured in The Millions, SEPIA, Hippocampus, The Rumpus, Autofocus, The Smart Set, Brevity, The Florida Review, Levitate, ANMLY, The Tiny Journal, The Cincinnati Review, Essay Daily, Mutha Magazine, Ruminate’s The Waking, Visual Verse, Manifest-Station, Pithead Chapel, Cleaver Magazine, Motherwell, with forthcoming work in ELJ, On the Seawall, CRAFT Literary, and DIAGRAM. She resides in Greater Chicago and is at work on a memoir excavating her mother’s madness through fragments. She is a former Mayo Clinic child/adolescent psychiatric R.N. and can be found @leslielindsay1 on Twitter and Instagram where she shares thoughtful explorations and musings on literature, art, design, and nature.