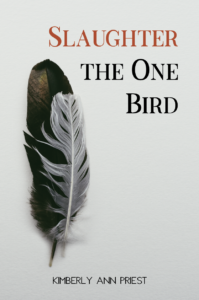 Reborn of Secrets and Teeth:

A Review of Kimberly Ann Priest’s Slaughter the One Bird

There will be diseased houses, God tells Moses and Aaron in Leviticus, before recounting to them the complex steps needed to purify a dwelling. When a priest finally deems the house clean, he will sanctify it through the ritual of two birds: slaughter the first bird over a vessel, dip the living bird in its blood, and cast the blood through the house seven times. Thus, in the story of the two birds, one does indeed survive—but does so awash in the blood of its sacrificed companion.

Kimberly Ann Priest’s remarkable collection, Slaughter the One Bird, moves among and beyond the walls of diseased dwellings, homes and churches where the speaker suffered unspeakable abuse. In her poems, she reminds us that survival is not a simple matter of leaving and overcoming. The second bird can take flight, but what’s done cannot be undone: she has been tortured in a ritual that combines violence with the promise of purification.

Slaughter the One Bird uses focused sections as well as interruptions—often a “body memory” that breaks into daily life—to take the reader through the speaker’s past, a past in which there were no safe places. In the section simply and perfectly entitled “the house,” Priest relentlessly challenges readers with a series of prose poems that all begin with “my pedophile”: “my pedophile requires attention,” “my pedophile takes me into his confidence,” and so on. Only in this portion of the book does attention on abuse remain constant, unblinking. In others, readers watch as abuse moves in and out of focus—but it is always there, lurking.

In other sections, the earthy beauty of Michigan’s woods meets with the cold loneliness of a trailer in a clearing. “Six Does Kiss the Fields” captures the environment where the footfall of deer can be, at any moment, interrupted by the pluck of rifle fire as hunters shoot near and far.  In “Untouched,” the speaker, years later, pairs with a man whose control and abuse are emotional, not physical, and the reader can feel her strain to articulate that being “untouched” does not equate absence of abuse. “You didn’t hit me last night. / You never do,” she says, but this is far from happiness. In “Wind Chime,” he says “If you ever leave me,/ …I’ll take everything: // your home, your children, your mind.” But in quiet, unexaggerated, plain triumph, she adds that she “still has all three.”

For the speaker, the best option is the possibility—fragile, at times—of a future, a different space, a new way. She births her son and teaches him to be careful, pushing against what she fears is an ingrained code of masculine violence and oppression. In “Strawberry Picking,” the son “plucks / a berry from his bucket / bites hard, the nipple broken / bleeding down his cheek,” but after watching his mother’s gentle nursing of a fresh berry, he “pulls the berry gently to suckle its juice, while closing / his eyes and lifting his face to the afternoon sun.” Holding him as an infant in “A Reflection on Pathos,” they watch rabbits nibbling away. In the speaker’s mind, a fear manifests: “Some say he looks like his father.” She resists, stating “I think / he looks like me, / every mite and particle // …//I taught him to be mine.” Amid this internal struggle over what her baby carries of his parents’ nature, the speaker turns back to the rabbits and closes with blood and terror: “Against what we know of their nature, / today they are craving fresh meat.”

Here and throughout Slaughter the One Bird, Priest’s voice is unadorned, frank, distinctly Midwestern, her poetry the truth of who we are in the Great Lakes. To her, what’s hideous exists alongside what’s beautiful—hunter and doe. The strength of women is assumed and expected, as is the possibility of men’s worst nature. There will be diseased houses, God tells us. But the speaker in these poems does not exist as a sacrifice to purify others. Though her life is irreversibly changed by what she has had to endure, it is her life, continuing.

Jessica L. Walsh is the author of Book of Gods and Grudges as well as two previous collections. Recent writing can be found in Whale Road Review, Fatal Flaw Lit, Thimble Lit, and more. Originally from a small town in Michigan, she now lives and teaches outside of Chicago. www.jessicalwalsh.com.