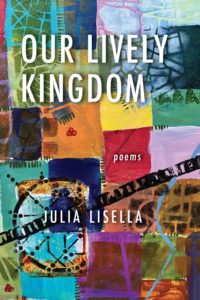 In the title poem that opens Julia Lisella’s latest collection, Our Lively Kingdom, the lived life that was once familiar is “now broken into village plots that others love to visit.” Reshaped by grief, memories take on new associations, evoking startling possibilities and insights in a narrative terrain where “almost anything can grow here—even last year’s annuals come shunting through with a tiny roar.” Lisella’s elegant and vividly rendered poems are wise, compassionate, and far-reaching in their scope, interweaving haunting themes on what is endured and sustained through seasons of motherhood and marriage, beloved friendships curtailed by illness and death, the tender love for adult children, and the care of an aging parent. The nature of grief, complicated by the ever-present specter of gun violence and the ongoing aftershocks of the pandemic, lives at the heart of these poems. In “Maternal Half-Life,” the very process of radioactive decay shapes the fallout of the 2016 shooting of Pulse Nightclub, a gay bar and dance club in Orlando, Florida, as mourning itself

shakes and shakes, trying to itself achieve half of half of half
which is infinite, bottomless,
like the bang, the plume of the machine gun
of the mad young man at odds with the body that made him
dividing and dividing the pure bodies of the 49 around him
into the halves of halves of halves of morning light.
And left in the doorways, the living rooms, the cramped kitchens,
are Mournings’s half-lives halved and halved and without end
like the half-life of the labor pain
that circles, returns, but does not diminish,
until the torso radiant with light amazes and releases
its others whose half-lives cleave and divide again.”

In “Faculty Development Workshop,” the speaker absorbs a difficult active shooter training set inside a university as the demonstration’s presenter asks,

Do you know the sound of the gun?
One person raises his hand.
Locate. Leave. Live.
There is another rule, but I forget the “L” word for it,
Lock? It will make all the difference,
but I can’t remember it.

As the speaker’s silent agitation rises, the presenter continues, asking,

This disorienting sense of uncertainty and terror is reverberated throughout the last section of Our Lively Kingdom, which focuses on the collective trauma of pandemic life during 2020. These poems capture the nuanced strangeness and sorrow of Covid-19’s first year, including the lonely tedium of isolation and quarantine as socializing and ceremonies are shunted online. In “Cleaning the Groceries in the Time of Covid-19,” the poet wonders how to avoid the virus:

Porous or non-porous, the skin of a melon?
the skin of my hands rinsed and soaped and rinsed
porous darkening olive winking through suds with a scaly grudge
non-porous the kitchen faucet, the sink,
the fridge, porous the plastic bag?

Time in these poems becomes distorted and nonlinear, while exposing the fragility of relationships strained by distance and restrictions. In “Poem for My Daughter in the Pandemic,” the speaker video chats with her eldest adult child, who lives in New York City, which “will be burning its two fevers” of pandemic lockdown and the protests against police brutality in the aftermath of George Floyd, Jr.’s death. She recalls her daughter as a carefree girl of twelve, while meditating upon the now young woman living alone “in the center of danger,” who “locks herself up in her bedroom, the eeriness of midtown’s empty streets a shudder until light breaks.”

The poems in Julia Lisella’s Our Lively Kingdom are dazzling in their nuanced depictions of life and the complexities surrounding one’s most intimate relationships. This is an essential collection, not only in its articulation of the fallout of loss and trauma in these ever-challenging times, but also in its willingness and grace to face that which is most volatile and difficult to embrace. In “I’m Receiving Now,” the poet does just that with “arms bare and wide…I’m receiving all the grief here it is here it is.”

Olivia Kate Cerrone is the author of The Hunger Saint, a historical novella about the child miners of Sicily. Her Pushcart Prize-nominated fiction has appeared in dozens of literary journals and won the Crab Orchard Review’s Jack Dyer Fiction Prize. She’s at work on a novel called DISPLACED, which recently won the Novel Slices Issue Four Contest, and was also longlisted for both the 2022 DISQUIET Literary Prize and the Masters Review Novel Excerpt Contest.