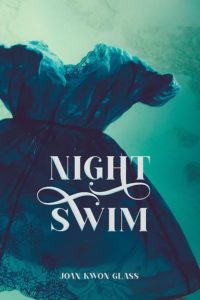 What do we do with our grief? How do we make sense of the rest of our lives in the face of unbearable loss? Surely everyone, after losing a loved one, has wondered that. For Joan Kwon Glass, the question arose in 2017, when she lost her eleven-year-old nephew Frankie, then, less than two months later, her sister Julia (Frankie’s mother), to suicide. Night Swim is the chronicle of her survival: riveting, wrenching poems of wide-eyed grief.

Night Swim’s five chapters are named after the five stages of grief Elisabeth Kübler-Ross described in her 1969 On Death and Dying: denial, anger, bargaining, depression, and acceptance. Recently psychiatrists have questioned both the linearity of this progression and its privileging of closure. But Glass’s poems don’t oversimplify. The poems spiral, circling back on themselves, inching toward an acceptance that never lets go of the grief propelling them.

The book opens and closes with swimmers—inviting us to think of what follows as immersion—in death? despair?—followed by an ascent, which is as much a miracle for the survivor of loss as for the swimmer. The opening, title poem depicts a “man in flippers and wetsuit,” who, having fled North for South Korea, emerges stunned by dislocation and cold. “They don’t release the man’s name,” the poem concludes, only his back, “as he staggers forward in the darkness, trying/to convince himself: I am home, I am home.” As a stranger in a new land, the swimmer suggests both the reader, opening the book, and the survivor, submerged in grief then thrust into strange, new territory. The poems that follow “stagger forward,” revisiting the past as they move into an unfamiliar future.

In the closing poem, “I Ask the Pearl Diver to Bring You Back From the Dead,” a Korean swimmer again descends and returns. Can loss be undone? this final poem asks. The pearl diver does indeed produce Frankie as the young man he never became: “a man of 25/with a brave face and playful eyes.” The other pearl divers applaud. But “how long do we have?” the speaker whispers. The respite is temporary—a point made more poignant by the fact that the word “pearl diver” is written in Korean, a reminder that some things can’t be translated, can’t be fully returned from the deep.

Such references to Korea appear throughout. Glass’s mother is Korean; she and her sister spent childhood summers visiting their grandmother there. This absent homeland provides her with analogies, complexities, silences—a way of suggesting how the past follows us around even as we move forward.

Glass’s language is straightforward, accessible; its power comes from its precision, from careful line breaks, and from the way everyday details are defamiliarized by grief. In “First Sunrise,” for example, the speaker stands at a photocopying machine the day after her nephew’s death: “a green laser lit up the room./My hand became an alien hand.” The final lines turn from the apparently trivial detail to the gut-punch of an underlying truth: “The sun had not risen yet/on that first day without him in the world./But it did. It has every day since.”

This persistence of the ordinary recurs as a source of pain. In “The Worst Thing,” the speaker remembers running into “Mrs. Arabo/outside Somerset Mall, two years after her daughter,/my friend Delores, died of ovarian cancer.” She greeted Mrs. Arabo, who crumbled into tears and fled. Five years later, shopping for candy to put in her nephew’s casket, she understands what she didn’t then: that she herself was the “worst thing” because she epitomized for Mrs. Arabo the way life goes on:

… I want to go back
to the revolving door, wave the living through as she smokes
until every last one has passed. Then, when it’s finally dark,
tell her it’s okay. Go, now. The coast is clear.

What strikes me, finally, is the way these poems move through denial, through rage at sister and mother, at the coldness of police reports and the incomprehension of strangers, not toward acceptance so much as toward compassion. Perhaps the only gift grief offers is this deepened understanding of others that brings with it, finally, a kind of peace. “Ribbons of seaweed blossom at our feet and nearby/mollusks spin sand into pearls,” Glass writes in the book’s final lines: “Every darkness we bear hides such small mercies.”