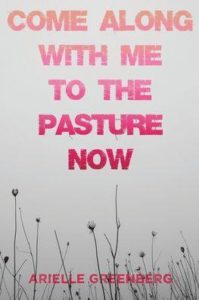 When I read the premise of Come Along with Me to the Pasture Now, which that is a woman leaves her city for the countryside, I was instantly intrigued. In these times of digital overload and a protracted pandemic, who hasn’t considered escaping their reality for a simple, unprocessed life? And so, I should be forthright: I read Arielle Greenberg’s latest book both for pleasure and also—in case my world-weary despair should ever reach an actionable level—as a how-to manual.

I assumed it would open with a few poems outlining the poet’s current dissatisfaction and then progress to her move—which might contain the faintest conflict with a few second thoughts—before landing softly, gloriously in the “after,” in the “all better,” in the bucolic, idyllic life. Greenberg’s journey was neither this simple nor this quick.

Greenberg begins her collection with hand-written notes explaining how she spent most of her early adult life in cities before temporarily moving to Belfast, Maine, for the delivery of her third child and a one-year sabbatical. In “Middle of a Lightning Storm,” she writes:

Here we understand this time—with children, a husband, and real weather experienced from the safety of a home—to be a rich, satisfying one.

And so, it’s a stark contrast when, after her sabbatical, Greenberg returns to Chicago. With 70% of the poems focused here, this is where the book does most of its heavy lifting. Her homecoming is not a happy one, which she relates in “I Return to the City”:

I used to write poems here.
I used to think I saw stars.
Now I’ve seen stars, write no more poems.
Buy twenty-five dollar tickets, plus the nine dollar and twenty cent convenience charge,   plus the three dollar retail outlet pickup charge,
for the concert that I hope will make me cry.
Say this is one good thing about living in the city.
Mean the band coming through to play the concert, not the paying. Not the crying (21).

Cultural events, like concerts, are typically a benefit of city life. But they aren’t for Greenberg, not now, and her unhappiness further extends into her teaching—the expressed reason she returned to Chicago.

In “Or, Down the Rabbit Hole,” every line begins “My job is to,” with predicates portraying different aspects of her job— some mundane (“My job is to use a whiteboard, and sticky notes, and to print out the class list”), some humorous (“My job is to therefore believe in the transmogrifying effect of Thanksgiving break”), with none typifying an ideal intellectual endeavor (“My job is blurry, infinite, permanent, tenured and tenuous”). Furthermore, her job of teaching doesn’t play nice with her job of mothering (“My job is not to think about my job while going to kiss my daughter goodnight”) (29).

The poems in this weighty section are plaintive, confident, and rush at you like an L train. While I was initially excited to read idyllic rural poems, I was most captivated by this messy, conflicted section.

The book’s final section, which numbers just 11 pages, finds Greenberg back in Belfast, Maine. In “Claim Song Moon, Abundance Moon, Cutting Moon,” she writes of gardening, observing animals, and noticing weather. This must be new poetic territory for her, because she calls it out with the self-aware, tongue-in-cheek, “oh, no/here it is the first of its kind/the poem with seedlings in it” (71). Joking aside, this poem goes on to find Greenberg settling into her surroundings without rushing the process.

but you don’t know yet what kind of soft brown bird that was with white-tipped wings
you sometimes forget you live by the ocean
and then you see the ocean and it stops you
with its still and wild utterance (72).

And here, triumphantly, was the payoff I was looking for.

Arielle Greenberg’s previous poetry collections include Slice, My Kafka Century, and Given. Her other titles include Locally Made Panties, which is a work of creative nonfiction, and the genre-melding chapbooks Shake Her and Fa(r)ther Down. Her poems and essays have been featured in anthologies such as Best American Poetry, Labor Day: True Birth Stories by Today’s Best Women Writers, and The Racial Imaginary.

Michelle Panik is a writer and ESL teacher who lives on the edge of California, in Carlsbad, with her husband and two kids.