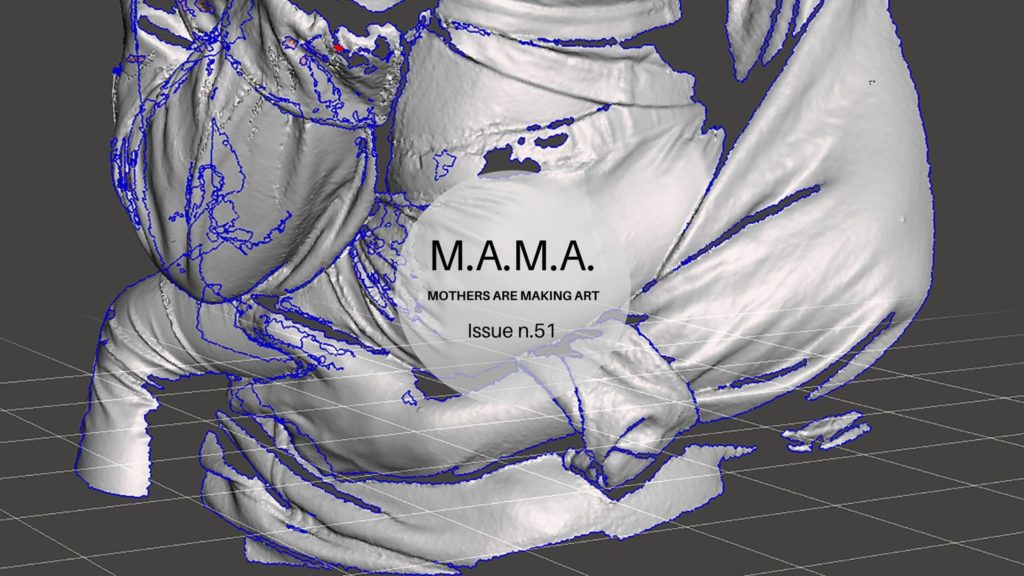 Procreate Project, the Museum of Motherhood and the Mom Egg Review are pleased to announce the 51st edition of this scholarly discourse. Literature intersects with art to explore the wonder and the challenges of motherhood. Using words and art to connect new pathways between the academic, the para-academic, the digital and the real, as well as the everyday: wherever you live, work and play, the Art of Motherhood is made manifest. #JoinMAMA #artandmotherhood

The Mother of Frankenstein’s Monster, 2021

The Mother of Frankenstein’s Monster (2021) researches the production of bodies and identities in relation to motherhood. ” My children were produced by and within my body”. Production continues after birth: children’s bodies grow and their identities develop. The identity of the mother is also born in relation to the child’s birth. This inquiry revolves around the idea of maternal “split subjectivity” and the child as an “unruly descendant” of the mother. It researches the conjunction of symbiosis and struggles present within a mother-child relationship.

The project includes an audio essay intended to be listened to at home. Listen to it while you are doing the dishes, or picking up toys from the living room floor. It departs from Mary Shelley’s famous novel Frankenstein or the Modern Prometheus (1818) and invites the listener to reflect upon maternal aspects present within their own lives, within their own homes. 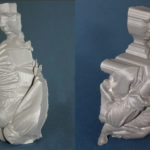 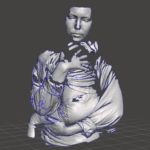 THE MOTHER OF FRANKENSTEIN’S MONSTER, Essay by Clara Aldén

Are you familiar with the story about Frankenstein’s monster?

Direct your gaze upon your child, and listen to this:

Dr Frankenstein was just a student when he started the creation of his creature. He struggled for two years to conceive his baby; stealing bones from graveyards, and intestines from slaughterhouses and autopsies. To create human life was his greatest ambition.

Yet, when the creature opened his eyes the only thing Dr Frankenstein felt was fear.

Why was he frightened?

I think he could sense that he had lost control over his creation.

Have you ever felt that you have lost control over your creations?

I imagine that Doctor Frankenstein didn’t understand what he was getting himself into when he conceived his baby.

My children were materialized out of a moment of loss of control. We lost control for a second and they started existing. The first time it happened I wasn’t aware of it for several weeks. The second time I immediately felt a new presence within my body.

“The idea of two people occupying one body is bizarre and disturbing. And yet, we all began life inside the body of another human being—immersed in a systemic interchange, absorbing both nutrients from the maternal body and hormonal derivatives of her emotions, while pumping out refuse through her bodily orifices.“

My pregnancy felt parasitic. I struggled my entire life to become autonomous, and now I was slowly dividing into two. My body swelled and grew. Inside my body grew the body of another.

My insides were suddenly someone else’s outsides and I bumped my stomach on tables as I tried to navigate this universe.

“As I lean over in my chair to tie my shoe, I am surprised by the graze of this hard belly on my thigh. I do not anticipate my body touching itself, for my habits retain the old sense of my boundaries. In the ambiguity of bodily touch, I feel myself being touched and touching simultaneously, both on my knee and my belly. The belly is other since I did not expect it there, but since I feel the touch upon it, it is me.”

It is impossible to physically tell if a pregnant person is one or two people.

The subject of the pregnant is split.

Do you recognize the sensation of your mind being two places at once?

How many creatures do you have within your care?

Look around you: we’ve already established that there are children within your care. But apart from that? Any pets? Or old parents that need care? Any plants that need water? How many things would not survive if you just got up and walked away?

During pregnancy a body is created. But a person is not just a body. Dr Frankenstein created a body but abandoned it immediately after birth. He got scared and ran away. His monster was left to care for himself. He wandered around trying to find company, but everywhere he turned he got violently rejected. The only thing he craved was love and affection. When he realized that this was something he would never obtain, he turned to his creator:

“Remember that I am thy creature; I ought to be thy Adam; but I am rather the fallen angel, whom thou drivest from joy for no misdeed. Everywhere I see bliss, from which I alone am irrevocably excluded. I was benevolent and good; misery made me a fiend. Make me happy, and I shall be virtuous.”

My children are neither monsters nor fallen angels. But they are my unruly descendants.

Physically detached from me. Free to roam the world. It is impossible to understand where I end and they begin.

Look at your baby: think about the complexity of bones, arteries and blood cells, nerves that exist under their skin. Imagine the universe that inhabits their minds.

For the longest time I wasn’t able to face my children. I looked at them but did not see them. I was afraid that if I did, truly look at them,  they would be pulled away from me like Eurydice was from Orpheus when he couldn’t keep himself from looking back at her on their way back up from the underworld.

I tried to make a drawing of my eldest, when he was just a couple of weeks old and realized that from now on, everything I produce, with hands, mind, voice, would stand in the shadow of the creativity of my womb.

Nothing could ever compete with these creations.

These creations also made it perfectly clear that they demanded my total focus and attention. No time for other artifacts.

What happens when the needs and wishes of your creations collide with your own?

Frankenstein’s monster started out as an idéa that grew into an obsession and then into a body.  The movements of this newborn body revealed a free will, detached from the intentions of its creator.

The monster followed in the footsteps of his creator. But somewhere during this race across the globe the roles were shifted; the antagonist became the protagonist, and the creator started chasing his creation.

Text with full reference list can be found here.

Clara Aldén (b.1988) is a Swedish artist working and living in Gothenburg. She holds a BFA from Bergen Art Academy (UIB, NO) and a MFA from HDK-Valand (GU, SE), where she graduated in 2021. Her work has been displayed in Västerbottens Museum (SE), Göteborgs Konsthall (SE), Index (SE) and Bergen Kunsthall (NO) to name a few.

Clara works with sculpture, drawing and text-based art. Her work is situated within the private sphere, and she employs her immediate surroundings to research general societal structures. Since becoming a mother her work has mainly focused on domestic and maternal thematics. Within Clara’s artistic research, motherhood is considered a practice and not a state of being. Likewise, this practice is not considered to be limited by biological bounds. She is inspired by Donna Haraway’s thoughts on kin-making, and even if the maternal interest grew out of her biological motherhood, her thoughts and research stretch away from the immediate biological connotations and wishes to explore the practice of maternity in the expanded notion. The notion of care, regarding interruption and control loss as a positive force, and trying to work in a relational and non-autonomous manner are examples of maternal aspects important within her work.