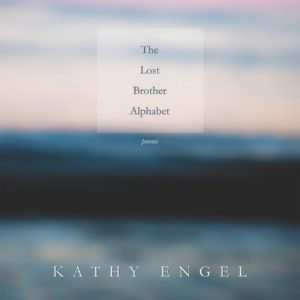 Fiercely lyrical is the phrase that comes to mind when I consider the whole of Kathy Engel’s The Lost Brother Alphabet, a multi-layered poetry collection as elegiac and intimate as it is politically urgent, as temporal and rooted as it is ontological. While again and again seeking to encompass a brother’s suicide and a beloved father’s death, the poems, themselves, are uncontained, exhibiting a formal inventiveness and restless intelligence that upend the usual equations.

A colleague recently shared that reading Martin Buber’s I and Thou renewed his appreciation of Jorie Graham’s oeuvre. It is precisely this sense of expansive lyricism —the relational lyric voice that sees and addresses others and interrogates myriad undefined interstices—that convincingly operates throughout The Lost Brother Alphabet. Writing as sister, daughter, and mother, Engel suggests that the precarious edges of things are where we construct purpose, forge connection, and find the will to outlive our dead.

Though titled The Lost Brother Alphabet, this collection is neither abecedarian nor project. More than a decade in the making, The Lost Brother Alphabet sprawls, digs, consoles, learns, remembers, reaches, and leaps. This is the work of a mature writer. Engel’s lower case “not there,” for instance, wants to declare an ars poetica, but instead propels narrator and reader into the gray of doubt and contradiction that invariably arrives with experience, ending with a caution that language and the individual artist, alone, are insufficient:

. . . i want
to define natural disaster & imperial power i am not there i want to know who’s
right i want to write it so beautifully so poignantly as if never said before i want to . . .
conjure simile to construct diction & shake the world into healing with the
form of my lyric . . . (24)

Another satisfaction The Lost Brother Alphabet delivers is a unifying consideration of girlhood, womanhood, and mortality, deftly located in relation to, or in distance from, horses. In “A,” this leitmotif marks a poignant intersection of quest, grief, and the possibility of renewal:

she stomps, curls her
brown slender leg,
scuffs the ground
with striped hoof
the way I want to;
instinctively I look
for you, brother (10)

Like “A,” the several spare poems in this collection deliver outsized emotional impact. The deceptively simple “S & T” positions the narrator as a sidelined, observing third person, and peels back time to reveal anguish and the unanswerable questions that suicide bequeaths to the living:

We hold your suicide like broken glass,
each with our different fingers & cupped hands
. . .
I would settle for sentimental in exchange for one true
sentence these last twenty years   Your suicide,

Tim, is not glass or shard; our different shapes, your sisters,
not clear; we spill, slide & sit still   You have killed (51)

The Lost Brother Alphabet’s major poem of witness, “To Kneel,” which responds to NFL athletes’ protests against racism, has gained attention as the moving choral centerpiece of Leah Natasha Thomas’s video “Who Will Be There to Kneel for You: Artists Speak Out” #whowillkneelforyou. True to the collection’s ethos, the poem’s narrator escapes the trap of assumed authority, instead bringing personal and generational accountability to the fore:

who will be there to kneel for you
when such a time comes, as it will
come? What will you say when
your children or your grandchildren,
their friends or lovers ask
what parts of your bodies
touched the ground
in the moment of loyalty,
or the moment of betrayal?
What would I? (44)

I’d be remiss if I overlooked attending to Engel’s elegant poems of wonder, in which the narrator’s inner musings, and even obsessions, enter into dialog with something essential and mysterious. “Volunteer” is a personal favorite:

Running my path, I stop at the sight of a small buck
In a field   Where did he come from,
his chandelier of antlers too heavy for his head?
I can smell the stillness he carries
in his tree of bone   Geese honk as they
leave me for another season   Who invited
any of us here   Who gives permission to leave (68)

The Lost Brother Alphabet seems especially suited to our current moment, a time replete with personal and national trauma that requires our poets to transport us to places we may not have planned to go, but deeply need. Beyond this, Engel’s is a book to keep in our libraries for the next generation and the next to read and treasure–right alongside Buber’s I and Thou.

Kathy Engel is a poet, essayist, educator, and cultural worker who has worked in many of the social justice, peace, and human rights movements in the U.S. and in solidarity with those around the world. She has co-founded and led organizations, including the women’s rights’ group MADRE.org. She teaches in the Department of Art & Public Policy, Tisch School of the Arts, NYU. Her books include Banish the Tentative, a chapbook; Ruth’s Skirts; The Kitchen, in collaboration with artist German Perez; and We Begin Here: Poems for Palestine and Lebanon. The video work Whowillknee4you appears on The Root.

Alison Meyers is a poet and fiction writer, twice nominated for a Pushcart Prize. The Executive Director of Writers & Books, Rochester, NY, she previously served as Executive Director of Cave Canem Foundation (NY) and Poetry Director & Director of Marketing at Hill-Stead Museum (CT). She consults as a LitTAP mentor for New York State literary arts nonprofits and is Treasurer of the Board of Kweli Journal.