Etta puts on her pink dress with the slit up the skirt. Lipstick. Powder. Mascara. Rhinestone earrings. Her fur coat. If she’s going to have an audience, she has to look her best.

The blonde is on duty. Etta can never remember her name.

Blondie whistles. “Etta darlin’ why you so dressed up?”

“You aren’t gonna wander off on us like last time, are you,” Blondie says. “Remember?”

Etta can’t. She can’t remember shit anymore. But she doesn’t want Blondie to know that. She already hears them whispering dementia in her doorway and she doesn’t want to give them a reason to lock her up for good.

“My daughter’s getting me,” she says. “We’re going to the Planned Parenthood rally.”

Etta doesn’t answer. Her daughter is one of those nut jobs.

Etta takes a seat and goes over her speech in her head, the speech she’d practiced with the horn-rimmed head doctor after he chapped her ass by saying she’d been a “stoic” mother because she never told Marianne: “I love you.”

“It’s my fault she’s shaming her tribe. I was too stoic,” Etta will tell the news. “Maybe she wouldn’t be a monster if I’d hugged her. If I’d let her sleep with me after she had a nightmare. If I’d held her when she was sick. It’s my fault that she turned against women. Marianne, I love you.”

Maybe those three magic words will snap Marianne out of the Republican horse-shit stupor she’s been in since the orange-headed lobster took office. No one knows that Marianne used to march in the Pride Parade every year. They know Marianne as the mayor’s wife in the four-story house, the only house with a tennis court. The woman who never misses church and thinks women should go to hell for making wise decisions.

When Etta asked to go to the rally, Marianne clutched her chest: “Oh Mama, I’ve prayed to the Lord about this for so long!” Then she’d stared up at the sky and whispered: “Thank you, Jesus,” tears coating her cheeks. Etta had tried not to puke.

Through the glass doors, Etta sees Marianne’s Range Rover pull into the parking lot. She gets out of her car. She’s wearing pearls. And a red dress and hat. Republican fucking red. Marianne, I love you, Etta whispers.

Marianne comes through the automatic doors. She goes over to the desk and signs Etta out.

“Mama, you are radiant,” Marianne says, looping her arm through Etta’s. She stares into Etta’s eyes.

“I am so glad you’re really doing this. I thought you’d back out.”

Marianne tears up. Oh, boy. Her daughter cried at everything when she was a little kid. One time when Etta hit a squirrel, Marianne had cried for days. She’d insisted they go back to retrieve the body so she could give the animal a funeral. But by the time they got there the little guy was just a tail on the road. Marianne became inconsolable, took to her bed. Etta had wondered then: How’d I birth such a softie? Now Etta wonders how Marianne’s heart got so twisted.

What would her daughter say if she found out Etta was one of those women that she marched against? That at sixteen Etta road a bus all the way to New York City by herself, in the dead of winter, to see a doctor who barely looked at her. There was so much blood Etta thought she’d die. She’d told no one.

Etta clutches her middle. The pain is unbearable, like she’s being knifed in the gut. Again and again. Every part of her aches. The lights are so bright. She’s sure she’ll faint.

“Let’s go, Mama,” the woman in front of her says. “We’re going to change lives tonight.”

Etta wants her mother, her bed, a shower. It’s all so far away. Dr. Adams told her she could catch the train at 42nd but she’s never taken the subway before. Maybe this woman can help.

Etta grabs her arm. “I’m bleeding,” she whispers. “I just had an abortion.”

The woman saying “mama” looks panicked. She turns to the blonde nearby and smiles.

Then, back to Etta. “Oh Mama, please don’t say such a nasty thing.” 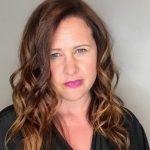 Jennifer Dickinson is a graduate of Hollins University. Her short fiction has appeared in Beloit Fiction Journal, The Florida Review, Blackbird, and others. The recipient of a Hedgebrook residency and a grant from the Barbara Deming Memorial Foundation, she works as a writing teacher and book coach in Los Angeles.