Breastfeeding and the Early Sacrifices of Motherhood

What they say about early motherhood amnesia is true: the first few months I was a mother are mostly a blur now, and looking back on them, I’m not sure how I made it through. I had my daughter in the first week of the pandemic, in early March. The birth experience was normal, but two days later, the world had changed; her doctor (and mine) were quarantined, all of my postpartum appointments were cancelled, the physiotherapist I had lined up made an apologetic call describing some exercises to do for recovery. My OBGYN’s office told me not to come in unless I was bleeding really, really heavily. Like, really heavily. And I was left on my own. And the exhausting trials of breastfeeding, which were ultimately more damaging than the actual birth, were just beginning.

That shattering sense of isolation in new motherhood came rushing back to me this week with the news of formula shortages across the country. I remember the earlier shortages in 2020, when breastfeeding wasn’t going well, and my husband was racing from supermarket to supermarket, searching for formula. The arrogant, smug comments currently circulating the internet that women should just breastfeed more — along with a flurry of misinformation and bad science about how breastfeeding works — has been dispiriting. I posted on Twitter what lactation consultants had told me to do, and was inundated with replies, some telling me everything I’d done wrong, others furiously defending me. There are few things more heated on the internet than the conversation around women and their ability to breastfeed. There are few topics that carry a greater burden of shame and responsibility.

I remember the few lactation consultant appointments I had, in the first few weeks of my baby’s life, when lactation consultants alternately browbeat and shamed me for holding the baby wrong; not trying to hand-express; pumping too early, or not pumping enough. They told me that to increase my supply, I had to first breastfeed for twenty minutes, then pump for twenty minutes, then supplement with formula, eight times a day, around the clock. Then they cancelled all future appointments as the pandemic began to roar into full force.

Breastfeed; then bottle feed; then pump. Wash and juggle baby, equipment. Rest; repeat. Around the hours of the clock.

I remember washing all the pump parts, hoping they would dry in time. About an hour of rest, my bleeding, cracked nipples leaking onto my damp shirt. Then again. That was my life, for four months.

I remember crying. I remember reaching out to my baby while my husband held her and the pump worked away on me, wishing I could hold her, but for the lurching, whirring machinery on my chest. I remember the crushing feeling of shame that I had already absorbed from the stern, propaganda-like posters on the walls of the lactation consultant’s wall: Did you know formula is full of CHEMICALS? they said. And, The only way to protect your baby from Covid is to breastfeed! (There was no vaccine available yet). I was a bad mother, an inadequate mother; I couldn’t provide enough of this most precious substance, so I’d better half-kill myself to make what I could.

In my fiction writing, I often write about the potent relationship mothers share with their children, particularly their daughters. There is a feeling of possession and ownership in that bond that daughters often chafe against. But until I became a mother, I had no idea how heavy the weight of motherhood can feel on a woman’s shoulders; how the burden of responsibility and love, the fierce need not to mess this up, can lead to self-punishment. In the early days I was so tired, and so afraid of dropping my daughter on the regular trips up and down the stairs, that I visualized again and again how I should fall if I were to slip. I imagined curling myself around her body, willing to break any bone if it would soften her fall. I practiced the move in my head obsessively. If I couldn’t give her milk, then I could give her my body in other ways.

My supply never increased, and I had to supplement with formula throughout this time. I realized, that no lactation consultant would ever tell me it was okay to stop. Their mission was milk, and they would continue to push that message and that mission to the detriment of mothers. When my supply failed to increase, in phone calls the lactation consultant recommended elaborate syringe feeding setups that spilled milk all over me and my crying, frustrated baby, and offered a prescription drug whose unapproved, off-label side effect was sometimes increased lactation. Experts I trusted were telling me to use unapproved medications on the slim chance it would create a poorly understood effect in my body.

That was when I said I had had enough. I listened quietly on the phone to the LC’s latest advice (more fenugreek; more off-label drugs) and I said I wasn’t going to be trying that. There was a silence, and then the consultant said, “You’re the mama.” It was the first time anyone had affirmed my role, and I hung up the phone with a profound sense of relief.

When I look back at that time, I think what felt the most cruel, and was the most revealing about the medical establishment’s priorities, is that all of my postpartum care appointments were cancelled in the wake of the pandemic, but the grueling lactation appointments continued (at least for several weeks). I was never examined again after walking out of the hospital, twenty-four hours after giving birth, having a second-degree tear and being stitched up (“it’s always a bit like a jigsaw puzzle”, I remember my OBGYN saying, frowning with concentration as she worked at the sewing challenge); it still frightens me, how utterly abandoned I felt by the system of doctors and organizations supposedly organized for my care. All that mattered was the milk. 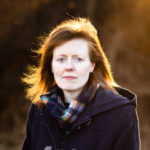 Blair Hurley is the author of The Devoted, published by W.W. Norton, which was longlisted for The Center for Fiction’s First Novel Prize. Her second novel, Minor Prophets, will be published in 2023. Her work is published in New England Review, Electric Literature, The Georgia Review, Guernica, Paris Review Daily, West Branch, and elsewhere. She is a Pushcart Prize winner and an ASME Fiction award finalist.