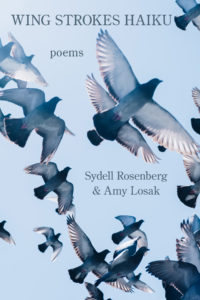 Collaboration in any artistic medium—literary, visual, performative—can seem both intuitive and misguided. On one hand, creativity begets creativity, and so artists merging their ideas could seem natural. But on the other hand, artists pursue things they’re passionate about, and having such endeavors knock up against each other can be problematic. But collaboration worked for Christo and Jeanne-Claude, it worked for The Roches, and it works for Sydell Rosenberg and Amy Losak.

Wing Strokes Haiku contains 44 poems that are arranged two to a page in what I like to call haiku “couplets” (not to be confused with the term for two lines of poetry). Each poet wrote half of the poems. Of the 22 haiku couplets, the first eight pairs begin with a poem by Rosenberg and end with one by Losak. The next eight are reversed: Losak’s first and Rosenberg’s second. Next come two haiku couplets by Losak and, finally, two haiku couplets by Rosenberg. In this way, each poet creates situations, completes them, and also speaks on her own. All of the poems relate, in some way, to winged things—birds and butterflies, beetles and bees, and all manner of insects, including an adventurous moth, a lifeless mosquito, and one rude cricket.

Sydell Rosenberg was a teacher, poet, and charter member of the Haiku Society of America who died in 1996. Amy Losak is her daughter and, since 2011, has been publishing her work. This is their first collaborative book.

Losak places her poem—which concerns a cat batting around a mosquito in the evening and evokes a dark tone—first. Rosenberg’s poem comes second, and it depicts a group of birds in congenial, mid-day free flight. The difference in how nature behaves—violently and then harmoniously—is striking. Were the order reversed, with Losak’s poem of discord as a response to Rosenberg’s one of harmony, the haiku couplet would end ominously. Instead, the progression is from eerie to uplifting.

With other haikus, the relationship is less obvious.

Here are two seemingly disparate images—a spider’s web strung between trees and light glinting off birds. Yet they prove complementary because both depict fragile, fleeting scenes. At any moment, the spider silk could break and sever the trees’ connection. Likewise, any movement of the birds would change the play of light on their feathers and disrupt the scene.

There’s plenty to unpack in each haiku couplet and, read with the intention of reviewing them for this mother-centered publication, Wing Strokes Haiku takes on another, provoking dimension. What must it have been like to collaborate with your mother’s poetry, especially after her death? As far as the subject of motherhood, the book doesn’t address it directly, but its penultimate haiku couplet does refer to the topic obliquely.

In the first one, a traveler is confronted by a common symbol of stasis—cobwebs—and one that’s closely associated with domesticity and cleaning. In the second, a self-reliant female duck makes a nest and takes a rest. Both poems concern pausing, and neither subject harbors any guilt or mixed emotions over their respites. Perhaps they’re two mothers taking well deserved breaks?

These poems, taken in isolation, cover common haiku themes of nature. Examined together as haiku couplets, the book deepens the complexity of the haiku form. While Wing Strokes Haiku is for anyone who enjoys haiku, it’s also for anyone endeavoring to collaborate creatively.