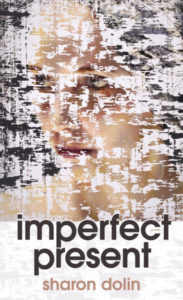 Sharon Dolin is the author of seven books of poetry including Imperfect Present. She is a translator, an essayist, and a teacher—the poet who won the 2012 AWP Donald Hall Prize for her collection Burn and Dodge. Dolin was a 2021 NEA Fellowship recipient, a Pushcart Prize winner, and a Fulbright Scholar. She serves as an associate editor for Barrow Street Press.

In Imperfect Present, Dolin merges her skills as a translator and poet. This is a collection that aptly captures the plurality of meaning present in the mind of anyone who skips in and between languages. Readers need look no further than the title, Imperfect Present, to find an invitation to language play. Most directly, Dolin’s title announces that this will be a book about showing up in the imperfect now of life. It also signals an exploration of language. This collection will engage the imperfect, linguistically speaking: the ongoing, the incomplete, the repeated habitual patterns of living, the continuous action of now, the state of continuous being. In choosing this title, Dolin also tells us what her poems aren’t: stuck in the perfect—that is, completed—past.

Imperfect Present’s titular promise is reinforced with the Buber and Stein epigraphs that open the collection, and underscored with Dolin’s opening poem, “Make Your Home in the Imperfect Present.” The book’s opening lines anchor us in the habitual: “How many times have you thought this” (3). Ultimately, this poem is also Dolin’s call to action, one that will be carried forward in the remaining pages. She asks us to live as “[i]f all [our]mistakes are not retakes… / but the mosaic [we]are building.” That is, to live in the imperfect, but beautiful, present. This opening poem also introduces a core motif of the collection. Throughout Imperfect Present, Dolin engages in a conversation with the language of the sacred, often by an exploration of words and action. In “Make Your Home,” she refers to Moses by the meaning of his name, and in later poems, by his action of splitting the Red Sea. Dolin is showing us what words can say even when they avoid direct address.

There are poems in Imperfect Present that interact with excerpts of scripture and liturgical prayer, with the words of Rabbis. There are poems that engage with the words of saints from the literary and visual arts. Even as they explore matters of spirit and artistry, Dolin’s poems revel in play, in pun: “You need presence of mind / to mind the present // or prescience of mind / to mime the present” (56). Whether in prayer or play we are asked, continually, by this collection: What is this thing, language, how does it convey meaning, and what else could be so delightful? It is paramount, then, for this book that itself puns on the terminology of linguistic study, to be in conversation.

Dolin does not limit her conversation to the content or diction of her poems. Imperfect Present is also a collection that asks us, as readers, to contribute to the poems we encounter. Dolin achieves this invitation for exchange through her use of poetic form. While she deftly presents poems in balanced couplets and tercets and experiments with internal line breaks and received forms, such poems are interspersed with several that defy a singular reading convention. Most of the “Trilogy” poems in the collection could be read as contrapuntal—but across three columns, and even in cascading sequence, as Dolin’s use of blank space and line breaks cause the eye to skip down steps as much as track across the page, or downward. “Reverse” (64) has such discretion of line that it begs to be read from the bottom up, and “Not Building a Wall but Making a Brick” (55) indicates by its form that it needs to be read across multiple axes. Again, Imperfect Present is nodding to the variety and spectacle of human language, to the many ways languages have made themselves readable. Ink on the page is another layer of syntax for this poet-linguist. In her presentation of form, Dolin is making a case for an expanded perception, coaxing us into trans-languaging, that is, integrating aspects of multiple languages into our way of navigating the world.

In every aspect of its construction, Imperfect Present challenges us to keep the vast experience of our lives ever-present, like “a sucking stone….that can loosen / into particles of moan” (83). We are asked to weigh our words on our tongues, to measure them against the words of our predecessors, and consider our impact. Dolin implores us to take ourselves so very lightly, and yet with deep, reverent contemplation.

Sherre Vernon (she/her/hers) is the award-winning author of Green Ink Wings (Elixir Press) and The Name is Perilous (Power of Poetry). Her debut full-length poetry collection, Flame Nebula, Bright Nova was released in 2022 by Main Street Rag. Sherre has been published in journals such as TAB and The Chestnut Review, nominated for Best of the Net, and anthologized in several collections including Fat & Queer and Best Small Fictions. Read more of her work at http://www.sherrevernon.com