My deepest sadnesses are completely ordinary.
Not the predicament of roundworms

as the shuttle Columbia, making its way homeward,
is eaten through by heated plasma, leaving their thermos

falling solo through the stratosphere. No word
can capture that experience, but

so many lose a pregnancy that there’s a name
for their children born later: rainbow babies.

The phrase harnesses the mythology of a watery disaster,
a promise of future safety.

I kept thinking my sorrow was something special,
but it was extraordinarily common.

The star-scar in my navel where they sewed me closed
once they knew my pelvic girdle was free of adhesions.

that made my hands smell like cold cream.
A secret I kept coiled under my tongue

as if it were a pill that would dissolve and render me
gravid. I was Saint Anne, patron of both the pregnant

and the childless, stilled in a silver charm bracelet.
But so were those putting ribbons on their profile pictures

in October, light pink and baby blue. Do we really
need another poem about this?

held up by a noble gas, not a fertility symbol. (After all,
the roundworms survived. After all,

some might say, You’ve got a child at home;
you were successful once.) 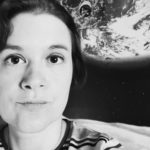 Lisa Ampleman is the author of a chapbook and three full-length books of poetry, including Mom in Space (forthcoming 2024) and Romances (2020), both with LSU Press. Her poems and essays have appeared recently in journals such as 32 Poems, Colorado Review, Ecotone, Image, Shenandoah, and Southern Review. She is the managing editor of The Cincinnati Review and poetry series editor at Acre Books.