After a compliment, after a friend or stranger remarked how

Delivering protection against that dreadful

Glorified the value of saliva and spittle.

How that evil eye originated or where it could lead, no matter.

It meant Grandma Becky found me worthy, pulled me close.

Justice would be served from the well-meaning

Kindness of others, no longer at risk from an ironic jinx.

Let us thank our grandmas and mothers whose

Miraculous spit flew for our health and safety.

No matter what they suffered and lost

Or wrought with labor and travail, we could

Press ahead into the unknown, glistening, wondrous. 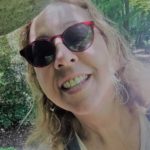 Cheryl J. Fish’s debut novel OFF THE YOGA MAT, the story of three characters coming-of-middle age, was recently published by Livingston Press/UWA. She is the author of THE SAUNA IS FULL OF MAIDS, poems and photographs celebrating Finnish sauna culture, the natural world, and friendships, and CRATER & TOWER, poems reflecting on trauma and ecology after the Mount St. Helens Volcanic eruption and the terrorist attack of 9/11. Fish teaches at CUNY and has been a Fulbright professor.