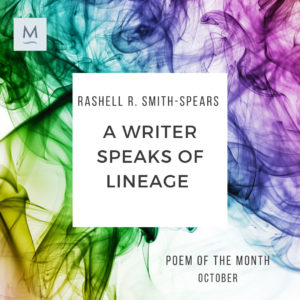 A Writer Speaks of Lineage

My foremothers were magic.
Their nimble fingers squeezed syntax into cauldrons of rhythm
and rolled juju across pages that glared with our erasure;
they poured images into white spaces
defined by the narrowed lines of Black people’s lives.
They touched history with metaphor, making charms to ward off lies. As I wait before the page, inky wand in hand, I know
my foremothers were magic.

My foremothers were full of wonder.
I speak their names as incantations against the spell of invisibility: Margaret. Toni. Gloria. Bebe. Leslie. Octavia.*
They have many clean words to say and unclean ones, too, because they were conjure women unafraid
to work the root of racial weeds.
My foremothers were magic.

Why am I not as they?

RaShell R. Smith-Spears is an associate professor of English at Jackson State University in Jackson, MS, where she teaches creative writing and literature. She has published poetry and short fiction in several journals and anthologies including Gumbo Magazine, Sycorax’s Daughters, Mississippi Noir, Dying Dahlia Review, and Black Magnolias Literary Journal.

Poem/Story of the Month