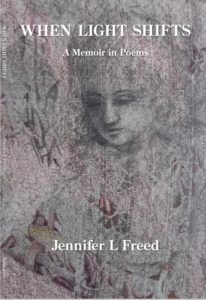 “When I kiss her, I bend lower than I used to.”  So thinks an adult daughter as she leaves her mother after a visit. Anyone who has ever had aging parents will recognize that gradual, deepening knowledge of impending loss: “Her hair, cut short,/shows the shape of her skull.”

But Jennifer L Freed’s debut collection of poems, When Light Shifts, doesn’t proceed as expected, from aging to death. In lucid, restrained, yet powerful language, Freed tells the story of her mother’s stroke, then partial recovery—a loss complicated by what is not lost, yet can’t be regained either.

When Light Shifts is a compelling read, with more of a plot-line than most poetry collections. In some ways it’s a classic adventure tale:  driven from home by the stroke, Freed’s mother struggles to regain control of her recalcitrant body, battling her way through the ICU, rehab, and assisted-living, desperate—like Odysseus—to return home.  But as for Odysseus, home, when she gets there, is not quite the same.

We tend to take the comfort and safety of “home” for granted; Freed’s poems suggest its fragility.  In “The Border,” ordinary details shimmer ominously as we see them through the “shifting light” of her mother’s cerebral hemorrhage:

in her driveway, while bending

to paint an old rocking chair.

From inside the mother’s mind, we move outside, where daily life continues but feels changed, almost eerie:  “The chipmunks raced on round the junipers./The sun went on bleaching the clapboards.”  And as the poem ends,  we move into the father’s consciousness:

He held her close, didn’t know

what to make of the trembling

The shifting focus feels cinematic; that innocuous suburban scene hints of horror.  When one member of a family suffers a brain injury, these poems suggest, everyone’s perspective changes.

The speaker’s parents, as well as the professionals they deal with, come across with almost novelistic vividness.  Rather than focus on her own emotions as her mother spends four days on the brink of death, then gradually improves, Freed gives voice to a range of people. In “Rehab Hospital,” for example:

legal your mother’s wishes in case of    ?

The broken syntax and extended spaces evoke what’s not said or not understood, or maybe what’s understood but not quite processed.  Both parents and daughter disappear into new roles; in “Week after Week” the daughter becomes “the calm hand/on the elbow, the steadying/voice.”  The emotional impact is understated but evident: “I keep bruising my head/on the corners of decisions,” the speaker says. “I am spinning./I am swallowing my tongue.”  Meanwhile the father, accustomed to depending on his wife’s warmth and dynamism, must take on the role of caregiver.

The book has four sections.  Part I depicts the immediate aftermath of the stroke, parts II and III chronicle the mother’s efforts to return to her old self, and in part IV, she finally makes it home. But part of the stroke’s effect is a lack of bodily self-awareness.  Underestimating her disabilities, the mother resists the care she needs from her husband and from aides.  “Your feet can’t remember the ground,” the speaker reminds her in “Tilt-a World”: “Days taste of fog./Your thoughts—stray cats in a field.”

Home is no longer an accumulation of familiar details, “As Though” suggests— “sunlight across her desk,/chicken thighs in her freezer,/dogwood trees by her patio chairs”—nor is it a familiar geography “where placing her feet before standing/was thoughtless as air.”  Instead it’s an obstacle course, where her husband hovers and an aide catches her just before she stumbles. And how I love the precision of those frozen chicken thighs, with their comforting hint of routine, of shopping for and feeding a family.  Shift the lens just a bit, and they become grotesque—factory-bred, dismembered.

Ultimately, though, these poems are saturated with love: the daughter’s love for her parents, the parents’ love for each other, and everyone’s love of the present, fleeting moment. In “Turkish Fig,” one of the book’s final poems, gaps between words invite the reader in, to share in savoring that time-bound sweetness. With her parents at their home, the daughter helps herself to a fig from the kitchen cabinet:

the fig
between my fingers    between
my teeth

taste
the fading
of taste