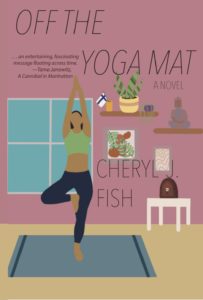 An ABD (all-but-done with dissertation) doctoral student absent of motivation, an artistic worker trapped in a corporate job and craving motherhood, and a yoga instructor seeking the good in all make up main characters in Off the Yoga Mat, a novel by Cheryl J. Fish. Divided into chapters dominated by one of the three main protagonists of the novel, the book is a modern tale of three people on the cusp of middle age

Set in 1999, before cell phones were ubiquitous and when the city was still affectionately gritty, the book begins in January with Nathaniel Dart, or Nate, an eighth-year doctoral student who is at a stagnant point in his education, employment, and love life. His dissertation topic is jealousy in Shakespeare’s Othello and King Lear from a Darwin-esque lens. Although he and his friends did not consider Nate capable of jealousy or envy, the book begins with him steeping in invidiousness of his girlfriend Nora and his friend Gil. As evidenced here, “he shuffled down Second Avenue, the success of others gnawed away at him. A cash bonus Nora received at the end-of-the-year—she deserved the money for a job well done—but he hadn’t grabbed her around the waist or smiled in a swell of support. Nor had he taken her out to celebrate.”

Gil and Nora encourage Nate to take a yoga class and though he is obviously out of place in the yoga studio, he enjoys the release he finds and becomes infatuated with the instructor. The instructor, too, is moved by the newness of Nate and finds herself interested in him.

Lula is the yoga instructor. A new-aged African-American and white woman, originally from New Orleans, who seems rather pansexual and free, until she begins a friendship with Nate. For Lulu, “sex and yoga were mutual portals to her soul—the equipment in her playground.” Her mother, who paints on the ocean, lives a freer life than Lula and when her mother falls ill, Lula risks losing Nate when she travels south to help her mother convalesce and get back on her feet.

Nora enters the novel in chapter three. She is done with Nate, who does not seem to appreciate her. She jumps on an opportunity at work to travel to Finland. While there, she would help the marketing department at Nokia and assist them in marketing their cell phones and work on a Y2K Committee. We learn very quickly that Nora’s proverbial biological clock is ticking. She is in Finland for adventure, for self-discovery, but also for a baby daddy. Her story begins when after making love to Nate, “a small grey moth flew out of the dark enclosure of his closet. It fluttered its gossamer wings in place and reminded her of time eaten away,” and soon after, she “panics” about loosing her chances of having a child.

Smart, funny, moving, and sometimes hot and heavy, the novel is a joy through and through, if not sometimes frustrating at the characters’ stagnation, but that is part of the suspense. Fish never panders to her audience or doubts their intelligence. She often uses quotes from well-studied thinkers to offer insight to her characters’ trials throughout the novel.

Ultimately, the novel is about happiness; we should realize early on that happiness is what each character is actively pursuing, be it through work, education, or love. In chapter ten, Nate asks himself what how does happiness happen. “Happiness: a human construct, perhaps non-existent in the animal brain. But what about pleasure? That was something else.”

Cheryl J. Fish is a celebrated professor in New York and a docent lecture in the Department of Cultures at Helsinki. Her poetry collections include Crater & Tower and The Sauna Is Full of Maids, as well as a number of scholarly essays on African-American travel writing, June Jordan, and environmental literature. Off the Yoga Mat is her debut novel, but I assume that she has many more novels in her!

DeMisty D. Bellinger’s books include the poetry collections Peculiar Heritage and Rubbing Elbows, and the novel New to Liberty. She has work in various journals, including The Rumpus, Contrary Magazine, and OkayDonkey, as well as in anthologies, including And If That Mockingbird Don’t Sing and Best Small Fictions 2019. DeMisty teaches creative writing at Fitchburg State University in Massachusetts.