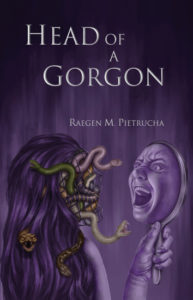 Revisiting Medusa in the Age of #MeToo:
A Review of Head of a Gorgon by Raegen M. Pietrucha

Harm abounds in Raegen M. Pietrucha’s debut full-length poetry collection Head of a Gorgon, but so does healing. Pietrucha, whose chapbook An Animal I Can’t Name won the 2015 Two of Cups Press competition, counterpoints the myth of Medusa, raped by Poseidon and punished by Athena, with a present-day story of sexual abuse to trace a long cultural history of misogyny and victim-blaming. Yet even as these poems trace harm, they offer a path towards re/dis-covery.

The collection opens with a story of grooming. Signifiers of the speaker’s youth include the speaker’s reference to sex ed classes being introduced in “spring of eighth grade—before lunch / and after a classmate had trouble // brewing in her stomach already” in “Sex Ed.” In “Collector” she saves treasures (butterfly, sand dollar) in a pink jewelry box; “The Spring Before Leaving Father” finds her waiting for the school bus. These nods to girlhood make the abuser’s voice in “A Snake’s Tale” especially menacing: “can you keep a secret,” “want to know a secret,” “I will show you how to / be like big girls.”

The six-part sequence “M & P’s Exchange” weaves the Medusa myth with the grooming poems. P is every older man pursuing a teen girl I’ve ever met (my boss at the pizza place, my boss at the fast-food place, that guy I met at a protest). Pietrucha is subtle, the way those men are subtle, and the slow advance of P’s language is deeply unsettling. “It’s lonely here, a desert so // thirsty it can only think of water. / Is it so wrong to long for just a sip?” he asks in “P’s Thirst.”

he pleads in “P’s Appeal.” P wears down M and then concludes “[b]est forget / what’s happened / forget about me.” Having gotten what he wanted, P washes his hands of M.

Head of a Gorgon turns on a dazzling fourteen-part sonnet sequence, “Reinvention Sequence,” which embodies the act of recovery. It begins with “Institutions,” in which the speaker wakes in a medical setting after an apparent suicide attempt. For thirteen lines the speaker is in despair. The final line counsels: “A new voice must first be heard to be cured.” As the sequence progresses, the voice of re/dis-covery takes up more space: two lines of the second sonnet, three lines of the third. In this way the sequence enacts the gradual nature of recovery and the way an abuse survivor must rewire their thinking. “What if you ditched the blinders, sought your light? / Why choose to keep dwelling in the darkness?” the recovering voice asks in “Flight Manifest.” Then, beginning with section eight, Pietrucha literally rewrites earlier poems by striking through the language. Pietrucha turns “A Snakes Tale,” that poem of grooming and enforced secrecy, into a poem of power by crossing out all of the abuser’s language but for the words “you … wouldn’t … hide … like … the … fish … know … your … bite.” In “Smithing,” Pietrucha takes a similar sword to the poem “P’s Thirst” to cut away the abuser’s wheedling language. Whereas “M & P’s Exchange” ended with M’s abandonment, “Reinvention Sequence” ends with “Ginosko”— a word loaded with the layered meanings of intimacy, experiential knowledge, sexual relations between loving partners, and to be known—entirely in the voice of a speaker who will not allow the abuse committed against her to define her.

Armed with this ability to re-write past harm, Pietrucha casts a new glow over Medusa’s story. She reminds us that Medusa is more than the Gorgon we know; she was, once, “a girl / felled in the grass at sunset” (from “Transfiguration”). Whereas the myth relates how Medusa’s gaze petrifies, Pietrucha considers the gaze from the raped girl’s perspective: “Vigilant beacons forget / the comfort of closing, refuse / any respite from their watch.” Not attack but an attempt at self-protection. Medusa’s mythical hands of brass? Since her human “[b]attle-bruised knuckles / proved useless / … [a]new mold must be poured.” Pietrucha transforms the Gorgon-monster into a woman seeking any means to protect herself from further violence.

Writers often say writing saved my life which is, I believe, a way of saying story saved my life. In Head of a Gorgon, Raegen M. Pietrucha enacts this salvation on the page. Stories can be re-written. A new voice can be claimed.

Jennifer Saunders is the author of Self-Portrait with Housewife (Tebot Bach, 2019) and a Pushcart, Best of the Net, and Orison Anthology nominee. Her work has appeared in The Georgia Review, Grist, Ninth Letter, The Shallow Ends, and elsewhere. Jennifer holds an MFA from Pacific University and lives in German-speaking Switzerland.