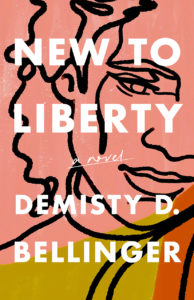 I read DeMisty D. Bellinger’s latest book, New to Liberty, while flying from San Diego with my husband and kids for a month-long stay in Costa Rica. With travel and cultural differences at the top of my mind, I instantly focused on these themes of the book. But the book encompasses much more.  What lies within these pages are the complete stories of three women from different decades, races, and socioeconomic levels. Told in three reverse-chronological order, first-person sections, these women’s stories are sad, tragic, playful, and—ultimately—uplifting.

Part I opens in 1966 with Sissily, a biracial teenage girl on her way west with her much older, white boyfriend name Ezzy. Part II is told by Nella, a middle class African-American teenage girl who moves from Milwaukee to the rural, primarily white town of Kismet, Kansas in 1947, where she has a relationship with a white, wheelchair-bound man named Lucky. Set in 1933, Part III closes the book with Greta, who tells of her unexpected love affair with an older woman and its tragic ending.

Like a protein structure, the stories of these three women fold back onto themselves in a way so tight and organic it is as magical and precise as genetic sequencing. In the interest of not spoiling the great unraveling of this story, my review is intentionally unspecific with respect to the plot, but rest assured that as the pages flip along, the similarities and contrasts between these women pile up in a thoroughly magical way.

With similarities to To Kill a Mockingbird and The Grapes of Wrath—traveling west, wanting better, the dust bowl, race relations, and a broken limb—Bellinger’s New to Liberty depicts these books’ issues of racism and famine through a different lens.

For most of the book, it feels as if the narrators are telling their stories very soon after the unfolding events. In the third part, Greta’s narration deftly shifts back and forth between a close recounting of the events and an analysis of them with more narrative distance. This is successful, both because it happens throughout the section evenly, and also because it’s the book’s closing section, where meaning naturally emerges.

In Nella’s section, her moving in and pulling back is employed irregularly. It’s most noticeable at the end of her section, where she says, “Years later, I would look back on the relationship I had with him [Lucky] as a little, quiet fight against the powers that be, one of many on the continuum of the fight for racial justice and equality. And we lost that fight. I wouldn’t come to that conclusion until I was ready to see Lucky again, but he was already gone.” Nowhere else in this section is race discussed so academically; instead, what preceded was a beautiful recounting of an interracial love affair that doesn’t endure. However, this instance doesn’t detract from book’s overall radiance or effectiveness.

Beauty of language and story is what emerges through these women’s voices. At the close of the final section, Greta remarks on the tragedies she and her family has endured by saying, “For a flicker of a moment, I thought of a possible dust storm, unannounced and unwelcome, and what an open window meant in a potentially debilitating storm. But it was just for a moment; I opened the window wider.” This is a book for anyone looking for an intimate look at the lives of three women—who are drastically different and yet endure difficulties that are regrettably similar—that is told with a quiet, confident prose.

DeMisty D. Bellinger has an MFA in creative writing from Southampton College and a Ph.D. in English from the University of Nebraska. She teaches creative writing at Fitchburg State University in Massachusetts. She serves as poetry editor at Porcupine Literary and Malarkey Books. Bellinger’s writing has appeared in many journals and anthologies, including The Rumpus and The Best Small Fictions: 2019. Her chapbook of poems, Rubbing Elbows, is now available and her full-length poetry collection, Peculiar Heritage, is forthcoming with Mason Jar Press.