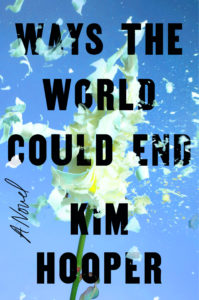 Ways the World Could End, Kim Hooper’s latest novel, is intricately constructed and deals with mourning, sexual identity, developmental disorders, confronting secrets, acts of violence, and the complicated act of forgiveness. There’s a lot the novel tackles, and Hooper handles it all well, giving each area the focus and depth it deserves.

In the opening chapter, Dave, a doomsday-obsessed prepper, discusses the end of life as we know it.

We’ve had a good run, as a species. Half a million years. We’ve built cities from nothing, created complex languages, visited outer space. We’ve invented and engineered and made the impossible possible. But, as I said, it will end.

Each of the chapters from Dave’s point of view starts with these musings—how things like mass weather events, asteroids, aliens, and nuclear or biological weapons could bring about the destruction of the earth. Dave wants to retreat from the world and isolate himself and Cleo, his teenage daughter. He says this is to protect them from these dangers, but really, he’s not good with social situations and lacks empathy because he lives with autism spectrum disorder. Cleo is dealing with typical teenage challenges of friend drama, navigating her sexual identity, pushing boundaries, and dealing with a dad who is different.

Hooper expertly shows through the alternating viewpoints of Dave and Cleo, journals, and flashbacks how people see and process the world differently. The novel presents the full circle of what it is like to be in a relationship with someone with a developmental disorder and also how the person with the disorder navigates life. The interactions between the characters are realistic and raw.

As much as Dave is focused on what will end all or most human life on earth, he’s already experienced an explosive ending with the sudden death of his wife and Cleo’s mom, Jana. Dave doesn’t immediately see that people are most likely to face the end their world through deeply personal events like the death of a loved one or the end of important relationships. Jana’s death is sudden and explosive, but the details are doled out slowly as the novel progresses. Even so, from the beginning of this book, Jana is very much alive on every page because Hooper has meticulously crafted this novel giving a voice to all the different perspectives.

Ways the World Could End is an intimate portrait of mourning in the immediate aftermath of the sudden death of a person who was the guiding force in a family. The reader feels how much Jana is still a part of the lives of those left behind, even if she is no longer physically present. And yet, there is a transformation among those still living, not a wildly dramatic one, but one that indicates that life moves on even though it is different from before. But in this, Dave and Cleo’s relationship doesn’t get buried under the presence of Jana. Cleo struggles to deal with her dad’s differences without her mother’s involvement, and Dave seeks to isolate them from others further. Eventually, Dave and Cleo find their path, both together and separately.

There’s a particularly moving scene in the middle of the novel between Cleo and Dave. It is Cleo’s first birthday without her mother, and they try to adapt to Jana’s absence and still carry on with traditions. Hooper crafts a beautifully simple scene, showing a small act of love that speaks to the entire essence of Ways the World Could End. Dave and Cleo teach each other about the need to adapt and open ourselves up to discomfort for those we love and how to make space for people’s differences while challenging them to be better. Kim Hooper’s novel is essential reading for its insight into neurodivergence, masterful structure, and emotionally complex narratives.

Emily Webber has published fiction, essays, and reviews in the Ploughshares Blog, The Writer magazine, Five Points, Split Lip Magazine, Brevity, and elsewhere. She’s the author of a chapbook of flash fiction, Macerated, from Paper Nautilus Press. You can read more at www.emilyannwebber.com and @emilyannwebber.