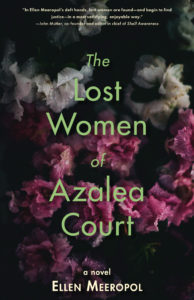 Ellen Meeropol is a fearless writer. When she picks up her pen and follows her characters, she goes to places and situations lesser writers might avoid: a young pregnant woman awaiting trial (House Arrest, 2011); an innocent academic pulled aside by airport security and incarcerated in a secret holding cell (On Hurricane Island, 2015); a young man walking the blurred reality line of man versus nature (Kinship of Clover, 2017); two sisters estranged by political choices and actions (Her Sister’s Tattoo, 2020).

In her latest book, The Lost Women of Azalea Court (September 2022), Meeropol’s characters meet at the intersection of family secrets, unethical institutional practices, and the heritage of political trauma that erupts when an elderly woman goes missing from Azalea Court, a circle of six bungalows on the grounds of a former state mental hospital.

“Everything changed when Iris went missing.” (11) “If you could see directly into our hearts and read our secrets, you’d know that in addition to the ugly, ancient secrets of the hospital, our little street is home to people who have survived all sorts of trauma, from genocide to rape to kidnapping to torture. But on that Friday morning…it was the last place any of us expected to see police cars and search teams.” (13)

The story is told from the point of view of each of the residents of Azalea Court, and by “The Women” who take things into their own hands when the search for Iris comes up empty. Together they uncover the hidden history of the state hospital and its last head psychiatrist, the husband of the missing woman. Asher Blum is writing a history of his time at the state hospital, where patients “known and unknown” are buried in a nearby field. When his missing wife sits beside the field, she contemplates that phrase. “Ironic how it mirrored her husband’s profession. Asher liked to pretend they knew how to treat mental illness, but she listened between the lines, and had long understood how deeply the experts were floundering, no matter what he wrote in that book of his.” (103)

Asher was not only struggling with the history of the state hospital, he was also struggling with his own history of loss when he and his sister escaped from Nazis during World War II. “Living through something like that takes away your tongue. It silences you.” (98) As his daughter Lexi begins to trace the connections between her mother’s disappearance and the earlier disappearance of her mother’s best friend, Meeropol confronts the harsh reality of women’s lives and the indelible scars that silence leaves. Against the odds, the women of Azalea Court band together to find the ‘lost ones’ and seek justice.

Meeropol has managed to weave together a mystery novel, an expose, and a family saga. Citations from Northampton State Hospital Annual reports appear as headers, placing the present in sharp relief with the past: “Table No. 5 shows the supposed Causes of Insanity in forty-four Cases: Intemperance 8, Masturbation 5, Disappointment in love 3, Pecuniary embarrassment 2, Hard study 2, Puerperal 2, Religious excitement 1.” (51) Although the quote is from an 1858 report, the ‘supposed causes of insanity’ could just as easily be applied to the lives of the characters living on Azalea Court in 2019. The Lost Women of Azalea Court is a cautionary tale of the highest order.

Celia Jeffries is a writer, editor, teacher, and author of the novel Blue Desert. Her work has appeared in numerous newspapers and literary magazines and has taken her from North America to Africa, and many places in between.