We crowded the ice cream truck. Sweat & took a dip. Crowded the boom box. Messed with some words to Jackson’s Human Nature—why, why? (cuz they screw us that way!) We ran over there with a dog & his frisbee. SPFed each other’s napes. Watched this teen girl destroy five, prize-winning sandcastles. Kick spires & shell borders. Stab at sculpted faces. Fill moats with bits that people called meat. With crushed cans & straws & foil chip wrappers. We watched cops charge up. But: they didn’t cuff her—so, we turned to our beach ball, the riptide. Then my suit strap broke. Then I saw that girl

slump on a broken Zuma Beach bench. “You just walked out your car…!” they pointed, yelled. & she stared past those crowding authorities. Said the same thing I said after carving FUCK on the belly of a snowman painted on a Buccaneer Camp window. (I don’t remember thinking words when I did it. Not even FUCK. I just wrote. & a snowman in Los Angeles is ironic—but I was nine & wasn’t scheming. Wasn’t laughing. & when the camp director took me to his office for a “hot sauce punishment,” I said what the Pacific—or kids—say to explain stuff.) Which is: nothing at all while I cried. 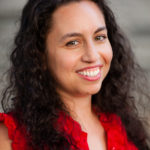 Jennifer Jean’s collections include OBJECT LESSON and THE FOOL. She’s authored OBJECT LESSON: a GUIDE to WRITING POETRY. Her poems and co-translations appear in: Poetry, Waxwing, Rattle, The Common, and as an Academy of American Poets “Poem-a-Day”. She’s won fellowships from the Kenyon Review Writers Workshop, the Disquiet International Literary Program, and the Massachusetts Cultural Council. Jennifer’s an organizer for the Her Story Is collective and the program manager of 24PearlStreet, FAWC’s Online Writing Program.