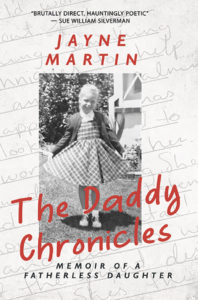 Today we have a growing genre known as fractured fairy tales and now, in The Daddy Chronicles, we may be experiencing yet another new genre: the fractured children’s story. Not that this memoir is a tale for children, but that it reads like a children’s book. Do not be deceived by the lovely cadence of these short vignettes. Make no mistake: this is not a children’s book, but a book for adults, specifically female adults, specifically female adults who have grown up with absent fathers.

The Daddy Chronicles opens with “Ode to the Lone Sperm”: “Eager little swimmer, perhaps/my competitive nature comes from you/Who didn’t get the memo that/fertilization was not my father’s intent” (xvi). Thus, we are immediately drawn into the world of “A child always wondering why.” (xvi) Martin begins this story in the third person, referring to her mother as “the other woman” who was “charmed by the melody of his promises” and referring to herself as “the baby.” She then moves directly into her own story “First Love” of reaching through the bars of the playpen to get her father’s attention. The use of the third person point of view and titles for each sketch move this story along rapidly. In “Pinball,” “The child falls asleep to the fog horns of San Francisco, awakens to rain on a rooftop in Portland, snow on the ground in Bozeman, the high-desert heat of Carson City” (5). Although we’ve been forewarned in “Ode to the Lone Sperm” and know the mother is dancing to whatever tune the father plays, fashioning the story in these snippets offers us the child’s experience of trying to make sense of the world around her, until the moment “Daddy leaves us for the last time” (7), and the story moves into first person point of view. “When Daddy comes back, I’ll be such a good girl. Such a good girl,” I say. (8)

What is unique in this writing is that Martin does not provide many age markers. We are not told ‘when I was xx years old, this happened.’ Instead she sets up scenes and allows the reader to grasp what’s happening with a few deliberate details. We know instinctively when we arrive at “Bless me father for I have sinned” (18) that the child is too young to understand what is happening to her. What is also unique, in such an emotionally charged memoir, are the moments of humor that break through. When her mother’s latest boyfriend invites her to keep him company while he’s taking a nap, Martin writes “This is the part of the movie where the audience is screaming at the screen, ‘Don’t go down to the basement.’” (18)

Throughout many painful incidents, the narrator remains above and beyond the action by referring to “the-man-we’ve-married” and “the-girl-who-is-not-my-sister” and stating facts plainly: “When she was nine, the age I am now, her mother stepped in front of the train that runs on the tracks just up the block from this house. It wasn’t an accident.” (27)

The Daddy Chronicles could be a sad tale of a little lost girl searching for the right man but here comes that humor again, as she and the one she thought was ‘just another one-nighter’ are cruising down the highway to a new life in Los Angeles and she can’t help but notice “A highway sign at an off-ramp reads “Go back. You are going the wrong way.” (66)

Before we know it, we arrive at the chapter “Father Figure” in which “My writing teacher tells me my work lacks emotion, that I need to be more in touch with my feelings and gives me the same of a therapist that works with his students.” (72) In the hands of a lesser writer this would be where the narrator wraps everything up in a tidy bow. But this is Jayne Martin, and she has taken us through this journey with all the wide-eyed wonder and stumbling steps that she took, and it will take “A Seismic Shift” (78) to reach the conclusion.

Celia Jeffries is a writer, editor, teacher, and author of the novel Blue Desert. Her work has appeared in numerous newspapers and literary magazines and has taken her from North America to Africa, and many places in between.