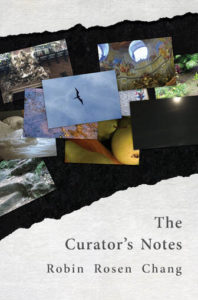 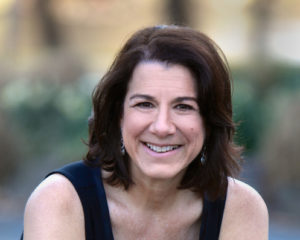 Robin Rosen Chang’s debut poetry collection, The Curator’s Notes, is filled with birds and water. The very first poem tells us “My Mother Was Water” (3); in the ensuing poems, recurring references remind us of the mother’s pervasive influence on the narrator’s life. Water–specifically, the ocean– is also the setting for several poems that tie together the three main characters of this collection: the narrator, her dead mother, and Eve, who has no mother yet is the mother of all.

Eve is explicitly the Biblical figure, accompanied by Adam, the apple, and the serpent, in poems like “Bleeding into the Garden” (19) and “The Fig Leaf” (55). Then again, she is also a child in what appears to be a contemporary setting, as in “Motherless, Eve” (48) and “Shore Birds,” which begins with the words “Motherless, Eve…” (8).

As the first woman in the world, Eve has no mother and no experience of being a daughter. Eve is, perhaps, the narrator’s attempt to imagine herself as she might have been without the mother described as “turbulent” (3) and whose “burden” includes “depression, paranoia, nervous breakdown” and “obsessions” (48). What things might such a child not know? “Shore Birds” provides one answer:

There was so much she didn’t know—
about birds,
about the subtle imprint
a mother makes, … (8)

“Motherless, Eve” provides another: “No four blue eggs. No hatchlings” (49).

At the same time, Eve never experiences the rejection described in “Lore”:

In nature, birds do what is necessary—
most nurture the young,
but some won’t feed the weak.
Others push eggs from the nest. (7)

“At the Beach” imagines Eve together with the narrator’s mother. We see the mother “trying to teach Eve, like she’d done with my kids and me, unaware Eve already knows” (56). What Eve “already knows” has to do with the mole crabs she and the mother are catching. Crabs spawn, abandoning their fertilized eggs to the ocean currents: motherless Eve is able to understand this instinctively, but does not possess bird-knowledge, which is also mother-knowledge. She does not know about building nests, sitting on eggs, feeding hatchlings, or teaching them to fly. However, the mother’s bird-knowledge is compromised by the paranoia mentioned earlier: the gulls steal from her, and she thinks they are laughing at her too.

Again and again, the speaker in these poems relates bird imagery to female relatives. “Daughter—At Four Years Old” (63) opens by comparing the daughter to a sparrow, while “Elegy for My Stepmother” (69) features the image of a crane in flight. In “We peered into the shadow,” we read a description of three juvenile pigeons:

[…] But, in these
unseemly squabs, only a beginning
before they and the mother would separate,
the young moving on, the mother living
a few more years before she dies.

My mother, a recollection. Now,
my aunt’s light waning. (66)

Even “Sagrada Familia,” a description of Gaudi’s Catholic basilica, uses the squawking of nearby parrots to evoke the memory of the narrator’s mother (71). All these images converge in the poem “Day of Gravestone Unveiling,” dedicated to the narrator’s mother, which ends with the figure of the child Eve from “At the Beach” merging with the narrator:

Ride a slice of air
between wind and wing
spanning the distance
between marsh and shore.

The ocean’s bubbles
foam at the starry footprints
of sandpipers skittering
at water’s edge.

On the jetty,
gulls huddle,
heads nestled low, turned
the direction of a child.

The last poem in the book, “Shore Liturgy” depicts sandpipers running up and down the beach, and then taking flight as “a pure silver cloud” (76). By now, we understand the sandpipers as a reference to women in the narrator’s life, and the imagery suggests souls taking flight for Heaven. The narrator gets up early to watch the shorebirds, concluding the collection with her own private ceremony of remembrance.

Robin Rosen Chang has an MFA from Warren Wilson College. Her poetry has appeared in Michigan Quarterly Review, The Journal, American Literary Review, Poet Lore, North American Review, and elsewhere. She was the recipient of the Oregon Poetry Association’s Fall 2018 Poet’s Choice Award and an honorable mention for Spoon River Poetry Review’s 2019 Editor’s Prize. An earlier version of this collection was named a finalist for Warren Wilson’s 2018 Levis Alumni Award for a manuscript in progress.

Tiel Aisha Ansari is a Sufi warrior poet. Her work has been featured by Fault Lines Poetry, Windfall, KBOO and an Everyman’s Library anthology, among others. Her collections include Knocking from Inside, High-Voltage Lines, Country Well-Known as an Old Nightmare’s Stable, The Day of My First Driving Lesson, and Dervish Lions (forthcoming from Fernwood Books). She works as a data analyst for the Portland Public School district and is president emerita of the Oregon Poetry Association. She hosts Wider Window Poetry on KBOO Community Radio.