As someone who has lived in Spanish Harlem for over a dozen years, my curiosity about the legendary Manny Vega, whose “Byzantine Hip-Hop” style lights up the neighborhood in murals all over El Barrio, has increased by the year. I finally got to meet Manny when he set up a mosaic teaching workshop for the community at a pop-up space provided by Hope Community, Inc. on 104th St. His warmth towards each child and parent who came through the door was notable and infectious, and he helped students produce over 50 mosaics of their own. As soon as I walked into his studio/workshop space, my eye was caught by the portraits of his late wife, and also, his late mother, Elena. Somehow, I knew these  pieces were more personal to him. Eventually, I asked about them, which gave me insight into his wonderful mother, his heart, and his art.

“How did my mother make me feel? Stable. Stable. Like I’m still her son, still her nene, still under her auspices, even at 62. She would know when something was off with me so she would call me under the guise of wanting to know the latest gossip … she had her way of just knowing and checking in with me. I saw the photograph that was circulating about her when she was 16. I said, I am going to immortalize her. And when I finished it, it didn’t fulfill me — until I did a smaller version of her, older. That was mom in the nursing home and that’s the mom that was precious in my mind. The older portrait of her was just a little candid personal shot, a moment when I was just flirting with her and keeping her smiling and happy, an elderly woman with dementia. You have to really work at animating and stimulating some joy and happiness in their life because it’s the only thing they can actually appreciate, in the moment. That’s what that portrait actually reminds me of. Those moments when I would play music and sing and dance with her while she would be in her wheelchair. My mom was unconditionally, unconditionally supportive. There’s a song by Dejavan. He sings, his mother was “the owner of his horizons.” My mom was that to me. She was the one who would stimulate me to create and to be an artist and a gypsy. My mother was not conservative, she was a little party animal.  Whenever I had an art project — she was a great seamstress –she was more than happy to engage with me. Now that she’s gone, that’s what I feel good about, that I did provide those good times for her. I can sleep when I think about my mom.  When I came back to New York, hot and heavy with this [Candomblé] belief system, my mother saw how it transformed me, how it took the nasty out of me, how it made me more responsible about my behavior, especially towards women, being more appreciative of life. She was proud that I was able to change and the goodness that I was transmitting for myself was good for my community as well. That I was treating people a lot better than I was in the past. The women are always in the forefront in my temple. Motherhood and women is literally the foundation of our practice. I’m enough macho to do that. I’m not compromising anything by doing that. What makes it important for me about that is to bring that message here, to a patriarchal system where men are just totally macho and women are so repressed that they forget…you’re the one with the power.”             –Manny Vega 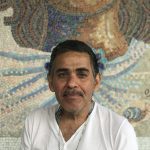 Manny Vega, born on Feb. 10,1956 in the Bronx, N.Y. is a visual artist who works in a variety of mediums such as Graphic Design, Illustration, Printmaking, Set and Costume design, Public Art Murals and Mosaics. Mr. Vega was a student at the High School of Art and Design, graduating in 1974, when he was enrolled in the art workshops of El Museo Del Barrio, Taller Boricua, and the Printmaking workshop, NYC.   Manny was an apprentice to the muralist Hank Prussing, who painted ”The Spirit of East Harlem.” This experience led to more mural commissions for Cityarts, United Bronx Parents, and the Bronx Council on the Arts.  In 1997, he was awarded a commission from the MTA to design artwork for the 110 Street train station in East Harlem. Mr. Vega has worked as art workshop instructor for arts organizations such as El Museo Del Barrio, Arts Connection , and the Guggenhiem Museum education program. He has worked as consultant for Paul Simon, and Lincoln Center Out of Doors. His public art projects and mosaics have created a very special artistic presence in the streets of East Harlem.  He has exhibited extensively in the U.S. And overseas in Brazil.  His next commission will be a collaboration with the sculptor, Ogundipe Fayomi, to create a life size portrait statue of ”Tito Puente” that will be installed on 5th Avenue in East Harlem.