I started making collages six years ago after I suffered a back injury that prevented me from going out at night and having fun. I am a poet and writer and found myself spending my days writing self-pitying poems about my injury, isolation and loneliness. My evenings were spent binge eating ice cream.

I knew I had to somehow take myself in hand. A good friend who is a collage artist told me he started making collages when he couldn’t sleep at night and suggested I give this a try. I remembered how much I admire the work of Joseph Cornell, the collages of Picasso and Braque and Matisse’s cut-outs. A few days later another friend who was coming to visit brought up with him a bunch of Martha Stuart magazines he had just found in the garbage. I don’t believe in coincidences so I took this as a sign. I had paper and Elmer’s Glue in the house as well as the perfect cutting tool, a family heirloom, a small elegant, very sharp fruit scissors my father brought back from France when he returned from W.W.II.

When I first started cutting up magazines, my choices of what I would cut out were determined by my responses to color and form. I had no predetermined idea of what I wanted to make. I would put a dozen or four or five or twenty cut-outs down on a piece of pager. The challenge was to see what kind of picture I could put together. The first collage I made was on a blue background representing the sea. A couple of little yellow ducks sitting on two scallions cut from a Martha Stewart magazine were floating towards an island made from rhododendron leaves. Voyage to Wellness was what I called it.

I soon found the collages I was making were like the poems I write, telling stories of my experiences and perceptions of the world. In the process of the telling, time flies, I loose my ego, at least temporarily. It’s nice, so nice. As a collage artist I particularly enjoy recycling what has been discarded into something altogether new.

My beautiful mother was an optimist. She trained me to always try to make the best of things. In my collages as in my poems, I often try to transform the negative experience into a positive one. I don’t always succeed but that’s all right too. The end product always surprises me and I hope it will inspire thought and bring pleasure to the viewer’s heart and mind. Like V.S. Naipaul, I believe the work is not complete until it finds an audience. Whether it is art, music, writing or dance, it’s always about communication, sharing.

I profoundly thank Mom Egg Review for this opportunity to share my collages with you. 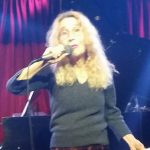 Tsaurah Litzky is a widely published poet and writer of fiction, creative nonfiction, erotica, memoir, plays and commentary. Her two successful collage shows, The Picture is the Poem l &2 (April 2015, October 2016) were at Gallery Gaia, Vinegar Hill (North Dumbo) Brooklyn. Her collages were also exhibited at FusionArts Museum and Jackie Lima Gallery in Easton Pennsylvania. They have been used as cover art for five books. This is her second appearance as the featured artist in the Mom Egg Review Gallery.