Snow White started no revolutions,
never protested her place among the dwarves,
simply swept and cleaned and shaved herself
pretty. She was nothing like my mother.

In dungarees streaked with paint and
threadbare, my mother fusses over cats
and sunflowers peeking from her garden
in the west field of her retirement farm.

Her mother had read the fairy tales
each night, along with the Lord’s Prayer,
passing the secrets along – the wisdom
of feeling blood-shame in dark pants.

Weeding the peppers, I remember
the thick pads, the talk over fries at
Mickey D’s, my mother’s truth
that there is no shame in causing stains

in going unshaven, growing fat and
old. Snow White was a sell-out, honey –
don’t let anyone tell you otherwise.
She was better than those short boys.

My mother chases the tabby into a crown
of tomatoes and gathers salsa fixings,
as I joke that she’s the princess of the
garden, this her enchanted cottage,

and that tabby, a dwarf who’s been fixed. 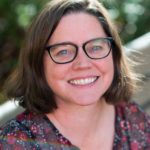 Jonie McIntire is the first female Poet Laureate of Lucas County, Ohio. Her chapbook, Semidomesticated (re-released by Sheila-Na-Gig Editions, 2022) won Red Flag Poetry’s 2020 chapbook contest. Her prior chapbooks are Beyond the Sidewalk (Nightballet Press, 2017) and Not All Who Are Lost Wander (Finishing Line Press, 2016). She is poetry editor at Of Rust and Glass, Membership Chair at Ohio Poetry Association, and hosts Uncloistered Poetry live and online from Toledo, Ohio. https://www.joniemcintire.net.